According to Stratistics MRC, the Semiconductor Manufacturing Equipment Market is accounted for $105.30 billion in 2022 and is expected to reach $191.70 billion by 2028 growing at a CAGR of 10.5% during the forecast period. Semiconductors have become a crucial component of every digital product, including ALUs and phones. Various industries are relying heavily on semiconductors such as the automotive, consumer electronics, data processing, and networking and communications. The machinery used in semiconductor manufacturing handles the actual production of semiconductors. To create highly integrated devices on a wafer, these machines manipulate atoms using etching, deposition, and lithography.

According to the Semiconductor Industry Association (SIA), the U.S. industry’s expenditures in R&D increased at a compound annual growth rate of about 6.6 percent from 1999 to 2019. Expenditures in R&D activities by U.S. companies tend to be consistently high, regardless of cycles in annual sales, which reflect the importance of investing in R&D production. In 2019, the R&D investment totaled USD 39.8 billion. 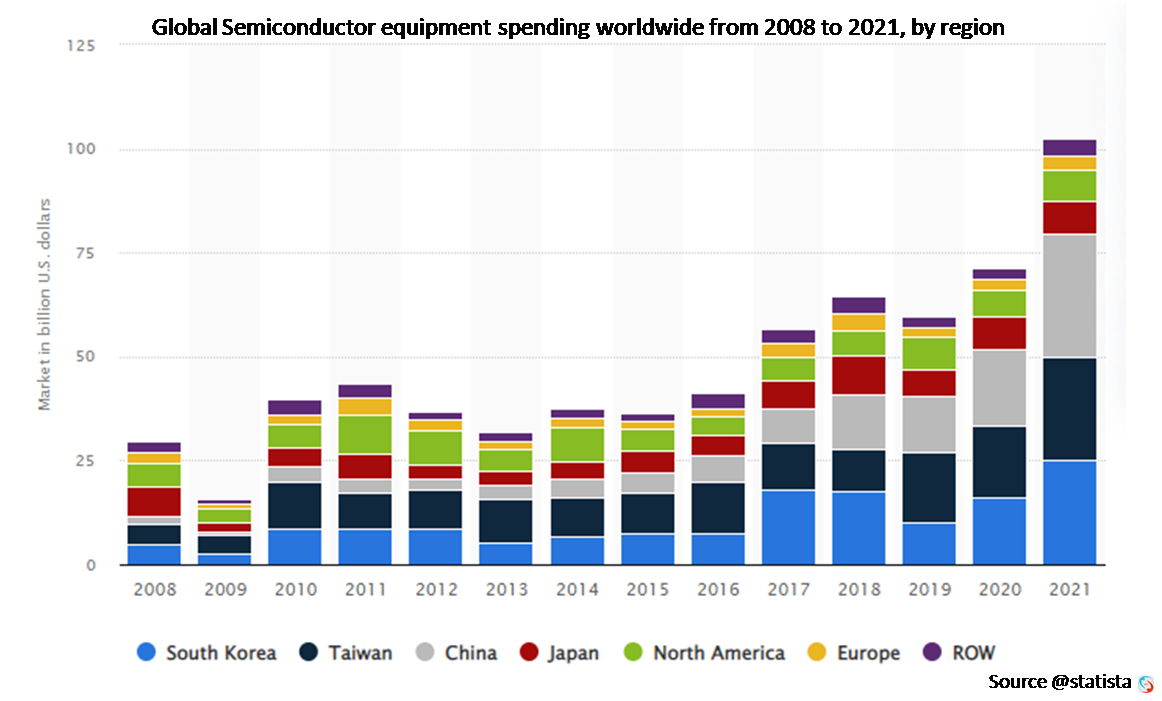 Complexity of patterns and environmental defects

Due to the environmental factors causing disruptions and growing of the complications regarding to the miniaturized structures of circuits are projected to hinders the market. Due to manufacturing flaws, there is a delay in supply, which results in further losses from order cancellations and clients switching to different providers.

Only a few of the inputs required are wafer materials, specialised chemicals and gases, processing equipment, final testing, and packaging; the businesses that supply these elements are distributed throughout the world. Offices, factories, and other commercial enterprises were shut down entirely around the world in the early phases of the epidemic, which had a negative impact on businesses and the global economy.

Covid 19 pandemic had a negative influence on the market for semiconductor production equipment, which decreased participant revenues. As a result, the market's growth trend slowed down in 2020 and the first half of 2021. With the increase in production volume and the spike in demand for consumer electronics devices and hybrid electric vehicles in the third or fourth quarter of 2022, the demand for front-end equipment, back-end equipment, and fab facility equipment is anticipated to soar.

The wafer testing segment is anticipated to witness the fastest CAGR growth during the forecast period, as demand for highly accurate ICs is credited with driving growth. Modern integrated circuits (ICs) must contain several functionalities, and the intricate circuitry requires the right testing tools to achieve precision.

The Asia Pacific region market is estimated to witness a highest share of the global semiconductor manufacturing equipment market during the forecast period, due to the rising developments in the semiconductor industry in economies such as India, South Korea, Japan, Taiwan and China in the region. Furthermore, the presence of major players along with increasing expansion activities by these players is also likely to support the growth of the market. In December 2021, Hitachi High-Tech Corporation announced the release of the Electron Beam Area Inspection System GS1000. The newly designed instrument provides precise and quick e-beam inspection through the use of a common platform based on established high-speed inspection SEMs and knowledge in industry-leading CD-SEM*1 technology, as well as high-speed and enormous measurements.

In May 2021, Lam Research Corp. introduced Vantex™, the most advanced dielectric etch technique built particularly for Sense.i™, considered to be the most intelligent etch platform. This groundbreaking design, which is based on etch leadership, provides improved performance and more extendibility for current and next-generation NAND and DRAM memory devices.

In January 2021, Teradyne collaborated with Syntiant Corp., an AI chip company, to successfully ship millions of its microwatt-power, deep learning neural decision processors to customers across the world.