According to Stratistics MRC, the Global Aircraft Flight Control Systems (FCS) Market is accounted for $13.05 billion in 2021 and is expected to reach $19.62 billion by 2028 growing at a CAGR of 6.0% during the forecast period. Aircraft flight control systems (FCS) are aerodynamic devices that combine automation and electromechanical skills. A conventional fixed-wing aircraft flight control system consists of flight control surfaces, the respective cockpit controls, connecting linkages, and the necessary operating mechanisms to control an aircraft's direction in flight. Aircraft engine controls are also considered as flight controls as they change speed. These systems consist of primary FCS and secondary FCS. These are used to provide safety to the aircraft during banking, pitching, and rolling and enhance the performance of aircraft. Primary FCS include elevators, rudder, and ailerons, whereas, secondary FCS include trim systems, spoilers, wing flaps, and leading-edge devices. 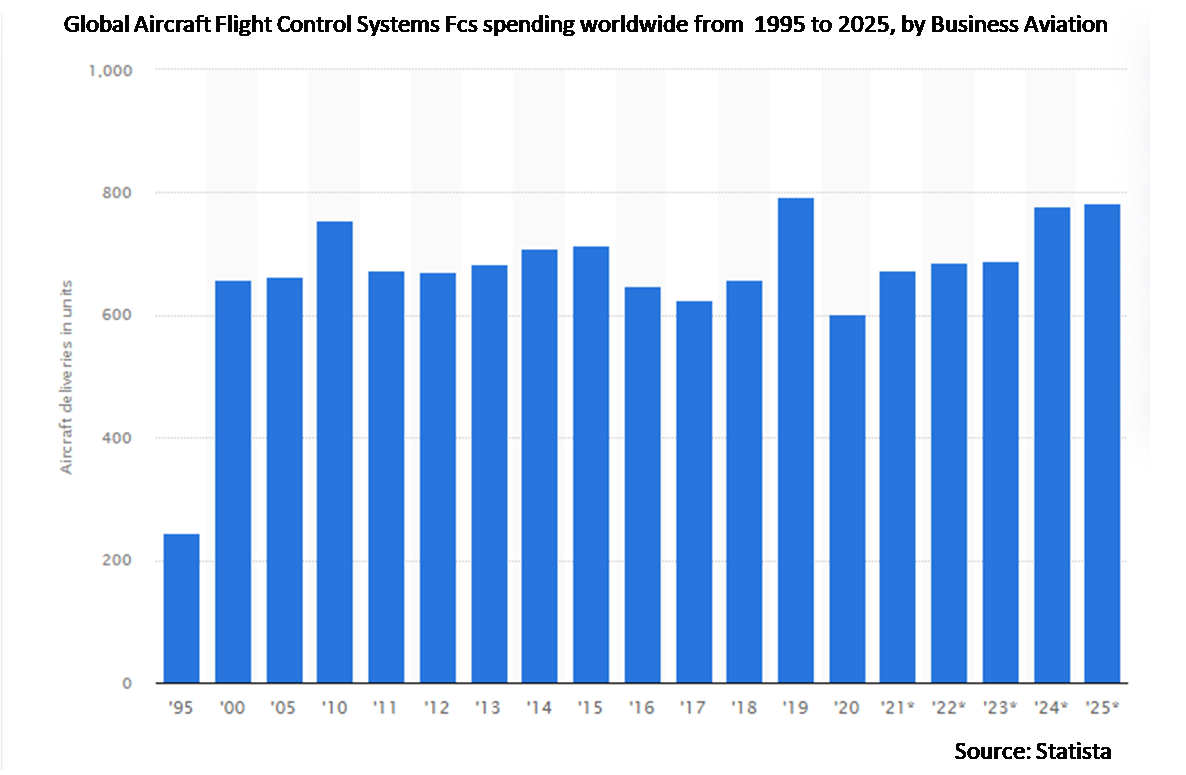 The advancement in navigational technologies, along with efficient aircraft operations such as flight operations, technical operations, and ground operations have enhanced the efficiency of aircraft operations. The increase in per capita income across countries has made air travel more affordable. This has further contributed to the increase in air passenger traffic, globally. According to study by the IATA conducted in May 2015, the number of passengers is expected to be greater than seven billion by 2035, with a growth of 4.1% per annum. The commercial aviation market is expected to triple in demand over the next 20 to 30 years. In addition, there has been an increase in the profitability of airliners due increased fuel efficiency of aircraft operations. Aircraft operational efficiency is determined by factors such as aircraft design, navigation & flight paths, and weather conditions. These factors are anticipated to increasing aircraft orders across the globe, which is expected to drive the global aircraft flight control system market growth.

Rise in the demand for commercial aircraft, business jets, and regional transport aircrafts, owing to increased air passenger traffic is expected to provide these manufacturers growth opportunities for the production of new aircraft, and consequently lead to growth of the aircraft flight control system market during the forecast period. For instance, emerging aircraft manufacturers in Asia Pacific and Latin America is one of the major opportunities for the growth of the aircraft flight control system market in the coming years. Commercial Aircraft Corporation of China, Ltd. (COMAC) of China, Embraer SA (Brazil), and Mitsubishi Aircraft Corporation (Japan) are some of the new companies operational in the manufacturing of aircraft. Mitsubishi Aircraft Corporation is engaged in the production of regional aircrafts, while COMAC manufactures commercial, business, and regional aircrafts.

A multitude of bilateral, national, and international regulations and standards bind actions of aircraft and aircraft component manufacturers, including aircraft flight control system manufacturing companies. The aviation industry is one of the highly regulated industries, mainly due to the inherent risk associated with flight operations. Countries across the globe have different regulatory bodies governing the safety levels associated with aircraft operation and manufacturing.

The linefit segment is estimated to have a lucrative growth. The linefit aircraft flight control system market is majorly driven by the increase in new aircraft orders on account of increasing demand from commercial airliners due to increasing air passenger traffic. In the aviation industry, some of the added options that are installed during construction of the aircraft are either provisioned or line-fit. This refers to items that are installed on the production line by the manufacturer.

The fly-by-wire segment is anticipated to witness the fastest CAGR growth during the forecast period. Fly- by wire system is reliable in adverse environmental condition with good signal transmission capability. Because fly-by-wire is electronic, it is much lighter and less bulky than mechanical controls, allowing increases in fuel efficiency and aircraft design flexibility, even in legacy aircraft. And to prevent flightcritical failure, most fly-by-wire systems also have triple or quadruple redundancy back-ups built into them. Further innovations to the system are also in development, including fly-by-wireless, fly-by-optics, power-by-wire, and more. Owing to this, fly by wire is the most widely used flight control technology in the aviation industry.

North America is projected to hold the largest market share during the forecast period owing to significant presence of aviation industry and high preference for air travel in the region. The USA is expected to remain the growth engine of the North American aircraft flight control system market as the country is the world’s manufacturing capital of the aircraft industry and houses many large-to small-sized aircraft manufacturers, tier players, aircraft flight control system suppliers, distributors, and raw material suppliers.

Asia Pacific is projected to have the highest CAGR over the forecast period owing to the increasing number of cost-effective airlines, and increasing adoption of advanced technologies in new aircrafts being used in commercial aviation in the region. The aviation industry in the Asia Pacific region has witnessed considerable growth in the past few years, owing to an increase in passenger traffic, presence of attractive tourist destinations, and upgrades of existing aircraft. The demand for aircraft is leading to an increase in the demand for aircraft flight control system, and major manufacturers, such as Parker Hannifin (US), are focusing on increasing their market share. Thus, the Asia Pacific region is projected to be the fastest-growing aircraft flight control system market.

In June 2019, Honeywell International announced development of new fly-by-wire system which is compact in size and is next step in the direction of autonomous and urban air mobility vehicles. The flight control computer contains the brains of aircraft flight control system and enables to fly the aircraft more safely.