According to Stratistics MRC, the Global Histology & Cytology Market is accounted for $16.29 billion in 2021 and is expected to reach $44.66 billion by 2028 growing at a CAGR of 15.5% during the forecast period. Cytology can be defined as the microscopic study of cell sample, which can be collected from any part of the body such as lungs, vagina, kidney, and others to assess the presence of irregular growth or lumps on the body surface. Cytology can also be used to assess abnormal body fluids that may accumulate in areas such as chest and abdomen region. Histology can be defined as the microscopic study of structural and chemical properties of body tissues. Histology is used extensively in the field of biomedical research and clinical diagnostics to diagnose diseases such as cancer, infectious diseases, and inflammatory diseases and to develop novel therapeutics for these diseases. The most common technique used to collect cytology cell sample is fine needle biopsy, which is also called fine needle aspiration wherein, a sterile needle attached to an empty syringe is inserted into the target tissue such as skin lump, joint, and others to aspirate either cells or body fluid. Other sample collection techniques such as skin scrapping, cotton tipped swab, smear, and others may also be used for cytological studies. Cytology can be used as a preliminary diagnostic tool for detection of cancer.

Cytopathology practices continue to struggle with the performance of cytologic-histologic correlation (CHC) and what to do with the results. For practices in the United States, the Clinical Laboratory Improvement Amendments (CLIA) require “laboratory comparison of clinical information, when available, with cytology reports and comparison of all gynecologic cytology reports with a diagnosis of high-grade squamous intraepithelial lesion (HSIL), adenocarcinoma, or other malignant neoplasms with the histopathology report, if available in the laboratory (either on-site or in storage), and determination of the causes of any discrepancies. 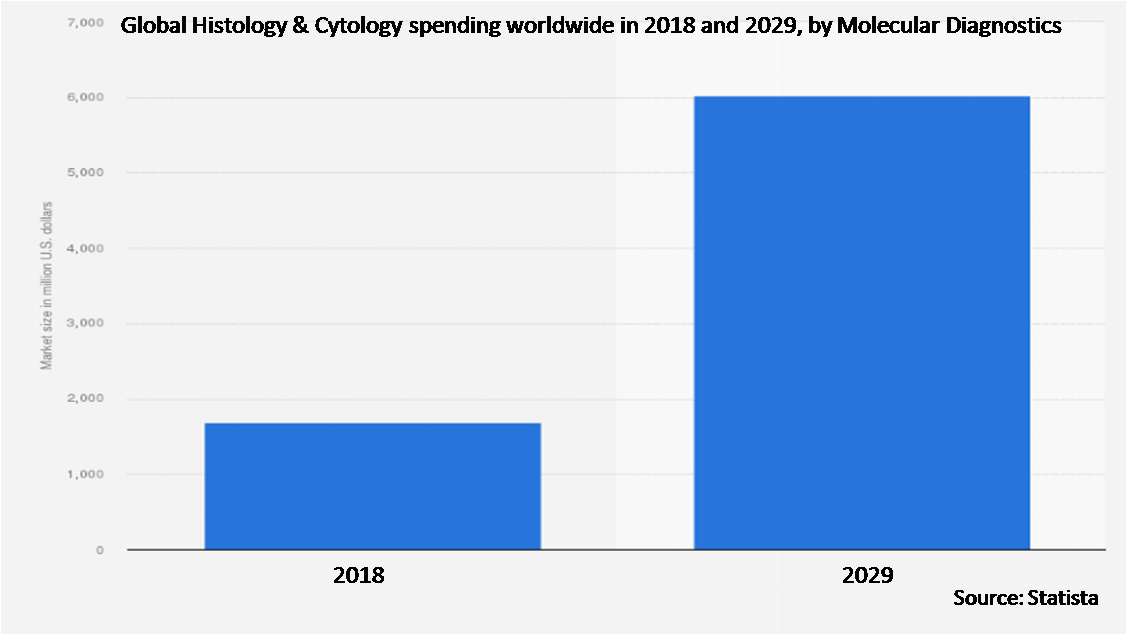 The increasing burden of cancer on society is found to be a major threat to the developing countries, owing to lower disposable income and dynamic demographics. Cancer has been the leading cause for mortality, globally and has resulted in deaths that have accounted for the largest share of mortality. Thus, the growing prevalence of cancer patients has a direct impact on the increased demand for the histology and cytology market. Globally, about 1 in 6 deaths is due to cancer. About 70% of deaths from cancer occur in low- and middle-income countries. These histological methods thus help in increasing the sensitivity, specificity, and accuracy of diagnostic methods. Similarly, the combined methods help in the better diagnosis of diseases, such as breast and lung cancer. Thus, the prevalence of cancer plays a vital role in increasing the demand of the histology and cytology market. Hence globally, there has been a growing adoption of cytological tests due to its less invasive nature as compared to biopsy and higher reliability.

Lack of awareness among the public for diagnostic tests

The major obstacles to its widespread establishment are lack of awareness and inadequate numbers of trained personnel compounded by sociopolitical factors, poor national planning and implementation. Rather than investing in new technology or alternative screening methods, efforts should focus on the education and training of local personnel, as feasible options, to improve the chances of implementing meaningful cancer control programs. There is a large untapped pool of trainable manpower in most of these countries. With available trained personnel in the field to handle the services and advocate for change, the chances of making screening programs feasible would be improved.

The onset of digital technologies is likely to shape the future of the global histology & cytology market in terms of boosting efficiency and scalability. The growing adoption of digital technologies is expected to accelerate the speed and accuracy of diagnosis due to which, the concept of digital pathology is gaining considerable traction worldwide. The increasing adoption of digital whole-slide-imaging (WSI) enables pathologists to visualize and capture the complete tissue on the slide in comparison with the view provided by the microscope– a factor that is expected to improve the accuracy of pathological processes and minimize its subjectivity. Digital slides pave the way for computer-assisted quantitative analytics, speedier image search, and efficient retrieval of slides. Advancements in precision medicine and AI are anticipated to improve care delivery due to which, more number of pathologists around the world are increasing embracing digital technologies. This factor is likely to provide a boost to the global histology & cytology market during the assessment period.

The stringent regulations policies from the government are anticipated to curtail growth in the histology and cytology market. This is due to the complicated procedures that are closely linked to histology and cytology. For instance, according to an article published by the National center for Biotechnology Information (NCBI) in May 2021, histological specimen slide preparation involves a number of steps such as fixation, dehydration, embedding, sectioning, and others which can prove to be a complicated and time consuming task. These may also hamper growth opportunities in the histology and cytology industry.

The drug discovery & designing segment is estimated to have a lucrative growth. The growth of the segment can be attributed to the wide use of histomorphometry and IHC staining in pharmaceutical and biotechnology companies for drug development. The image analysis is applied across several steps of drug discovery and development such as drug efficacy and safety studies, target validation, drug repositioning, patient stratification, and biomarker expression studies.

The cytology segment is anticipated to witness the fastest CAGR growth during the forecast period. The cytology segment has a wide range of applications in multiple cancer types. Cytology tests are useful for both the diagnosis and screening of various cancer types. Due to the observations at the cellular levels, the companies primarily prefer cytology-based diagnostic methods. Since in the coming decade, companies are focusing on diagnosis at the molecular level, cytology is expected to play a vital role. The cost of histological tests is higher than cytology studies, mainly due to the multiple phases involved in its preparation, whereas no such stages are classified for cytology slides. According to the World Health Organization (WHO), estimates that breast cancer is the most frequent cancer among women, impacting 2.1 million women every year globally, and responsible for a higher number of cancer-related deaths among women. Hence, due to the aforementioned factors, the demand for cytological methods is expected to boost the market growth.

North America is projected to hold the largest market share during the forecast period due to the increasing geriatric population, growing cancer incidence and raising awareness about cancer screening in the region. According to the American Cancer Society, cancer is the second most common cause of death in the United States, exceeded only by heart disease. Furthermore, awareness pertaining to advance therapeutics and presence of well-established healthcare infrastructure is also fuelling the growth of the overall regional market to a large extent. Hence, all these factors are expected to help propel the histology and cytology market in the North America region.

Asia Pacific is projected to have the highest CAGR over the forecast period owing to the several factors such as the rising cancer awareness, a large target population, and improving healthcare infrastructure. In addition, researchers are increasingly evaluating new cytology, which is further fueling the growth of the market in the region. For instance, in February 2020, researchers in Japan evaluated the efficacy of liquid-based cytology over conventional cytology in cervical cancer screening. The results of the study indicated that liquid-based cytology was comparatively more useful than conventional cytology from practical standpoints.

In May 2021, Hologic, Inc., received premarket approval from the U.S. FDA for its ThinPrep Genesis Processor. This instrument combines sample aliquoting and cytology processing with improved workflow.

In June 2021, Antech Diagnostics introduced a Digital Cytology Scanner in North America. This scanner allows the delivery of whole-slide interpretations within 2 hours, which facilitates in reducing the examination time and assessing a large number of samples at POC settings.