According to Stratistics MRC, the Global Smartphone Market is accounted for $520.3 billion in 2022 and is expected to reach $863.03 billion by 2028 growing at a CAGR of 8.8% during the forecast period. A smartphone is a type of mobile device that enables increased access to online resources and other digital features. Numerous applications developed by third parties are supported by platforms like iOS, Android, Windows Phone, and others. Governmental assistance for the development of telecom infrastructure, product launches that prioritise cost, the emergence of 5G technology, Artificial Intelligence (AI), and other technologies, and most crucially, rising disposable income, all contribute to the market's expansion.

According to Stat Counter, Android remained the world's most popular mobile operating system in January 2022, with a market share of close to 70%, while iOS accounted for roughly 25% of the market. According to Air now PLC, the GarenaFree Fire- World series and PUBG Mobile-Kara kin that generated a revenue of USD 38.56 million and 37.76 million in April 2021. 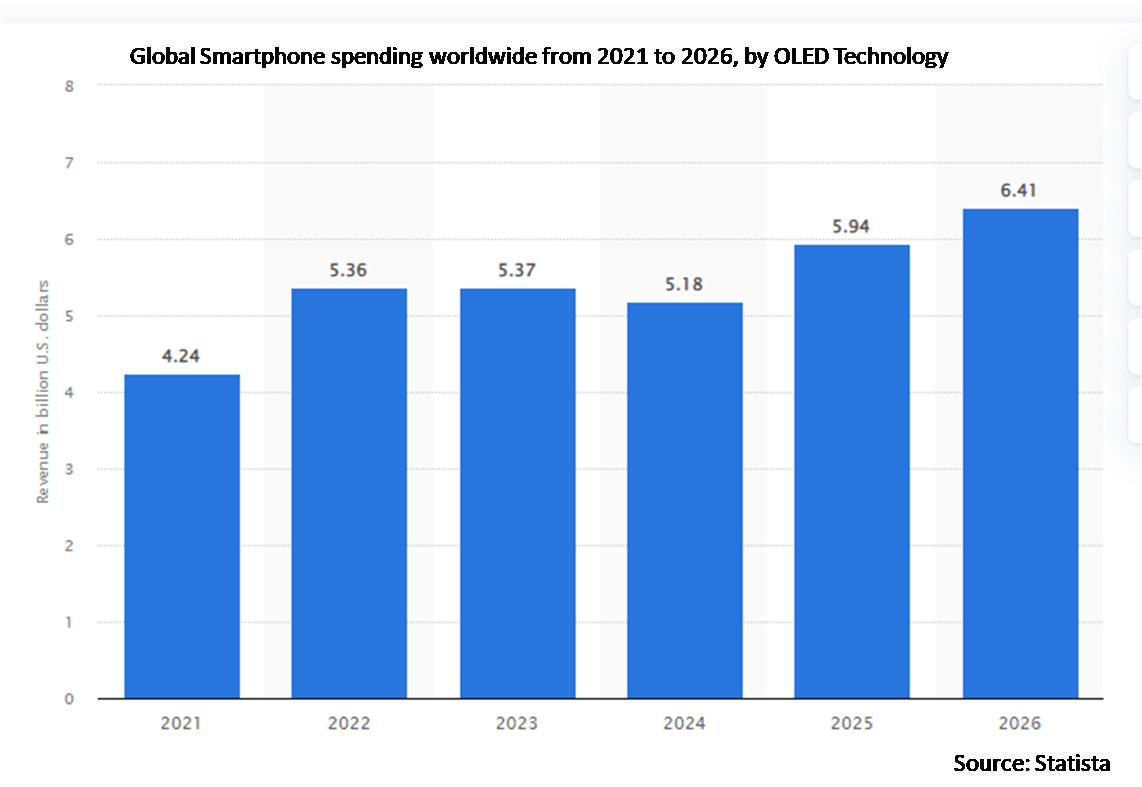 Consumers' disposable income has increased globally, increasing the likelihood that they will spend money on media, entertainment, mobile technology, and networking. Electronics purchases, including those of smartphones, laptops, tablets, and gaming consoles, have significantly increased in recent years. A 2016 independent survey of electronic device suppliers found that demand for smartphones has significantly increased as a result of rising consumer disposable income, particularly in emerging markets. Therefore, it is anticipated that rising disposable income will fuel the expansion of the worldwide smartphone market throughout the forecast period.

High-end smartphones are available from premium smartphone manufacturers like Apple Inc. and Samsung, and demand for these devices has increased recently, especially in industrialised nations. Customers demand smartphones with the same functionality as high-end smartphones, but at an accessible price, in price-sensitive markets. The expansion of the global smartphone market is anticipated to be hampered during the projected period by the saturation of mature markets in some regions.

Increasing investment by manufacturers in R&D

Manufacturers of smartphones are spending more money on R&D projects in order to create cutting-edge products that appeal to modern customer desires. Additionally, in order to maintain their market share and increase profit margins, manufacturers are spending money on the design and manufacturing of their own application processors (AP). As an illustration, Apple Inc., one of the most coveted brands in the global smartphone industry, creates its own AP. Therefore, over the course of the projected period, rising R&D activity expenditure is anticipated to benefit the global smartphone market.

High production volumes and supply chain activities have a significant negative influence on large companies, but have less of an effect on small and medium businesses. The lack of semiconductor components is also negatively affecting the market because they are essential to overall product utilisation and innovation initiatives. Companies are setting up semiconductor manufacturing facilities in case there is a component shortage, which could reduce the scarcity. The market will be impacted by the scarcity, though, at least through the end of the period. The development of the global market is also expected to be hampered by applications that generate false fingerprints and facial recognition.

The appearance of COVID-19 has halted global activity. We are aware that businesses across industries have had an unprecedented effect as a result of the health crisis. Nevertheless, this too will pass. Increasing government and corporate assistance can aid in the battle against this extremely contagious disease. Some industries are doing well, while others are experiencing difficulties. The pandemic is expected to have an overall

The original equipment manufacturer (OEM) segment is anticipated to witness the fastest CAGR growth during the forecast period. They mostly develop their manufacturing outlets across the nations on their own, without assistance from outside sources. As a result, the number of outlets is increasing globally. For example, Vivo Mobile Communication Co., Ltd. said that it will open 150 exclusive stores in India to increase its share of the smartphone market.

Asia Pacific is projected to hold the largest market share during the forecast period owing to reasons including rising per capita income, a sizable population, rising disposable income, and a rising interest among the populace in utilising new technologies and services, the smartphone industry in the Asia Pacific area is expanding rapidly. Companies like Jio, Airtel, and others are slowly growing smartphone penetration in India while also raising demand by offering data at the lowest feasible cost.

Europe is projected to have the highest CAGR over the forecast period, owing to the increased demand for smart phones and expanding use of smartphones on digital platforms in the face of the COVID-19 epidemic. The majority of cell phones sold and produced worldwide are in this area. Asia-Pacific economies differ in terms of consumer preferences, smartphone adoption rates, brand market shares, and mobile subscription rates. Due to the rapid adoption of 3G in emerging nations and the accessibility of media tablets at lower prices, Asia-Pacific will continue to experience a surge in the popularity of media tablets. 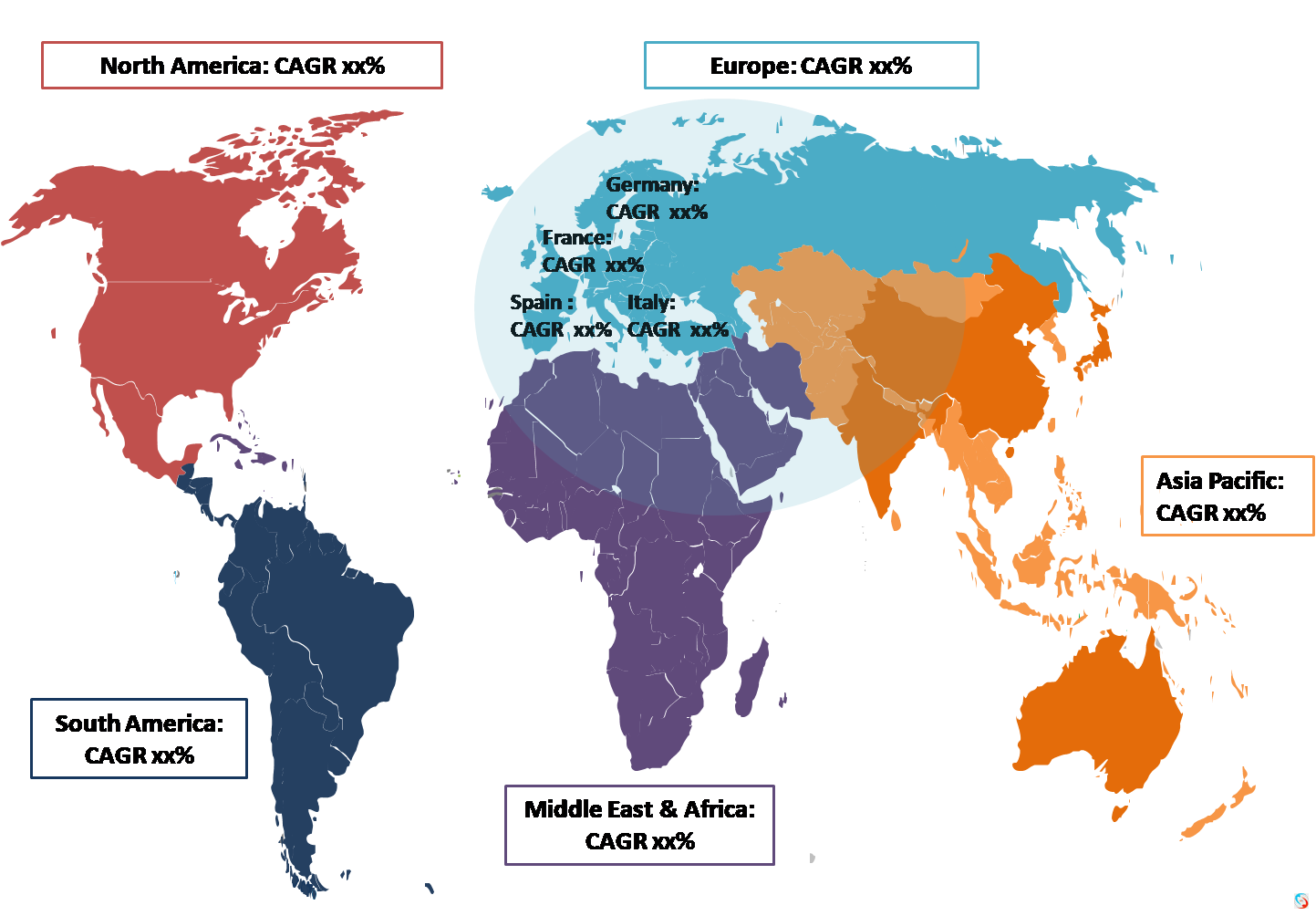 In August 2021, Samsung introduced the ‘Galaxy Z Flip3 5G’ and ‘Galaxy Z Fold3 5G’, the innovative foldable mobile phone. With iconic design, both the devices are built with flagship innovation, offering a unique user experience to work, play and watch.

In July 2021, Vivo Communication Technology Co. Ltd expanded its 5G portfolio in India with the launch of the powerful Vivo Y72. Priced at INR 20,990, Y72 delivers a superior smartphone experience through its robust features while sporting a clearly differentiated design in its category. The smartphone offers 8GB+4GB expandable RAM, which prevents the phone from choking while multi-tasking.

In July 2021, Samsung India launched a new smartphone, Galaxy A22 5G. It offers 11 bands’ support for 5G experience and two-year OS upgrades. It has a 6.6” FHD+ display with a 90Hz refresh rate, versatile 48MP triple camera, 5000mAh battery, and a host of other innovative features.