According to Stratistics MRC, the Global 3D Display Market is accounted for $109.42 billion in 2022 and is expected to reach $320.26 billion by 2028 growing at a CAGR of 19.6% during the forecast period. A 3D display is used to display a three dimensional view of a picture or environment.3D display is an developing technology and adopted more and more for various applications such as gaming, video, education, photography and defence among others. 3D display is one of the latest developments in the electronic industry as it offers a very immersive 3D viewing experience.

According to the report generated by Pew Research Center in 2018, 43% of adults in the U.S often play video games on Television, computer, and portable devices. Therefore, to enrich the advent of AR & VR technologies in online games, consumers are inclined to adopt 3D display devices, propelling the industry progression. According to Verizon Communications, a 5G service provider in the region, between March 5 to March 12, 2020, there was a 75% increase in gaming traffic and a 20% increase in web traffic. Furthermore, the penetration of 5G technology will further boost the usage of smart devices and gaming consoles, driving the industry value. 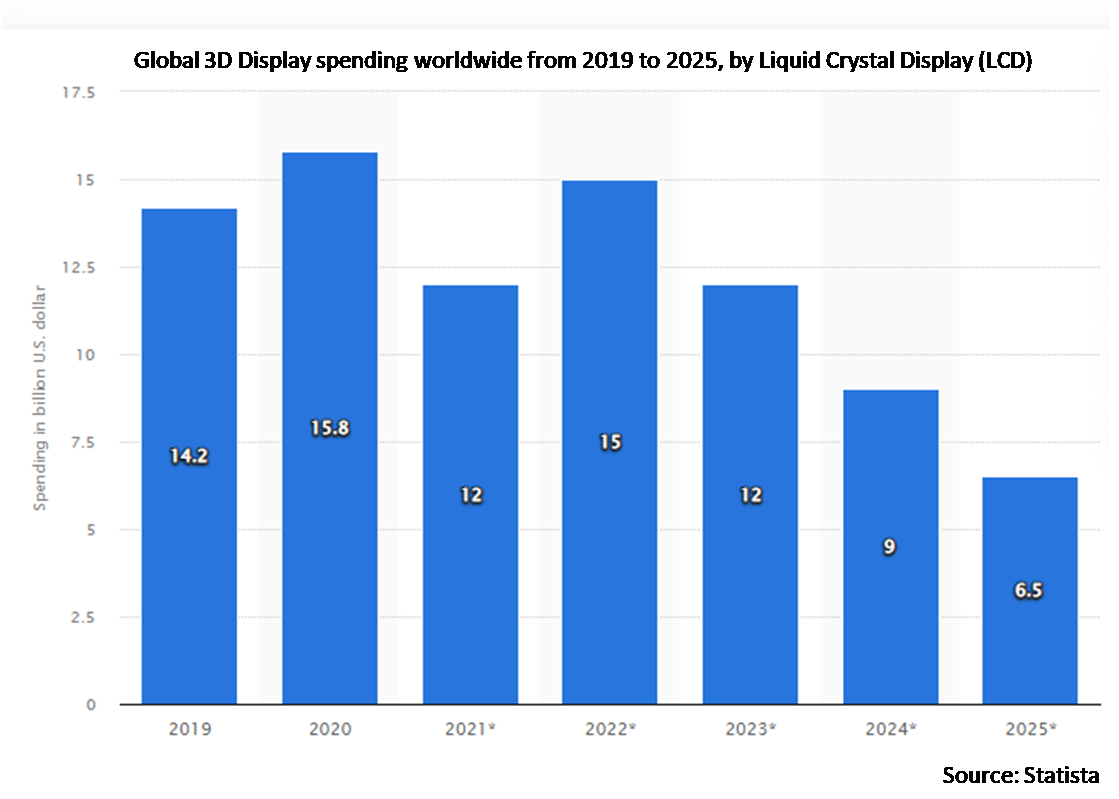 Growing introduction of VR in gaming

The popularity of VR gaming consoles is rising in developed economies. Using a VR headset people are excited to experience the 3D creatures in the computer-generated virtual environment. The growth in the gaming industry fuelled the demand for advanced gaming software and content under virtual reality technologies. These technological innovations in VR gaming are also expected to drive the growth of the global next generation market during the forecast period.

The high cost associated with the 3D displays is restraining the market growth. The costs of the associated products are also high. Moreover, the maintenance and repair cost is high owing to the use of more complex technology compared with standard ones. Hence, most consumers prefer standard gaming consoles. Such factors will limit the growth of the market focus during the forecast period.

The rising adoption of augmented reality in numerous medical applications and surgeries is creating opportunities for the Market. The technology advances the vision capabilities of surgeons and decreases operation time and pre-operative planning. Stereoscopic 3D products are useful in numerous applications including TVs, smartphones, tablets, and computers. Key players in the market have introduced compatibility in HMD with minimum hardware requirements. Multinational conglomerates such as Sony and Samsung prominently operate in the business of HMD. Advancements in autostereoscopic technology are poised to trigger the growth of this segment The rising reception of increased reality in different clinical applications and medical procedures sets out open doors for the market.

Consistent viewing can often cause headaches or eye infections, such as dry eyes in normal people as most of these displays are to be seen with glasses. The reported side effects include an increased heart rate, tired eyes, headaches, nausea, disorientation and dizziness. Based on the increasing number of complaints, 3D-technology companies have released warnings concerning which users are most at risk of suffering from the aforementioned side effects.

The outbreak created significant disruptions in primary industries such as automotive, retail, and consumer electronics. The sharp decline in the electronics and manufacturing industries is impacting the growth of the global 3D display market. The COVID-19 outbreak has halted several manufacturing plants worldwide, majorly the consumer electronics and automotive sectors. A decline in the buying power of consumers for luxury products has restrained the production activities of various major leaders, thereby hampering the demand for 3D displays. Furthermore, the pandemic has also restrained research & development initiatives in the industry owing to a lack of workforce and disruption in raw material supplies. Disruption in the supply chain has led the majority of market players to procure raw materials from local leaders and overcome raw material shortages.

The Head Mounted Displays (HMD) segment is expected to be the largest during the forecast period. The growth of the segment can be accredited to rapid technological advancements and declining prices of 3D displays. Moreover, growing popularity in sectors such as science, engineering, and medicine are contributing to the segment growth.

The consumer electronics segment is expected to have the highest CAGR during the forecast period, owing to the increasing implementation of 3D displays in TVs, smartphones, and monitors. A shift in consumer preference from watching movies at theatres to watching them at home on TVs or computers has encouraged TV manufacturers to focus on the 3D display as a value addition to their products. These TVs render a better impact on visualization, offering improved picture quality, and vibrant high-end devices with premium features. Consumer Electronics Manufacturers (CEMs) are trying to position 3D-based TVs as high-end devices with premium features.

North America is projected to hold the largest market share during the forecast period, owing to the rapid expansion of the gaming and entertainment industries is anticipated to positively influence the market in the U.S. and Canada. The rising number of cinema screens and the surging development of 3D movies in the U.S. are some of the other significant factors that are likely to bode well for the market. Moreover, favorable government policies boost innovation and purchasing power, and expand the industrial base, especially in developed countries such as the US and Canada. The US is a prominent market for 3D displays owing to the growing media and entertainment sector, and rising focus on designing 3D-enabled smartphones and TVs.

Asia Pacific is projected to have the highest CAGR over the forecast period strongly driven by the increasing demand for 3D display in advertising and broadcast sectors in the province, owing to changing customer preferences and rising disposable household income. The presence of major technology players such as LG Electronics, Sony Corporation, Samsung Electronics, Panasonic Corporation, and Fujifilm Holdings Corporation is also supporting the growth of the market.