According to Stratistics MRC, the Global 3D Sensor Market is accounted for $3.65 billion in 2021 and is expected to reach $18.3 billion by 2028 growing at a CAGR of 25.9% during the forecast period. 3D sensors are depth-sensing devices that aim at connecting the devices with the real world by using projected light and a camera system. 3D sensors own a wide application in modern life. 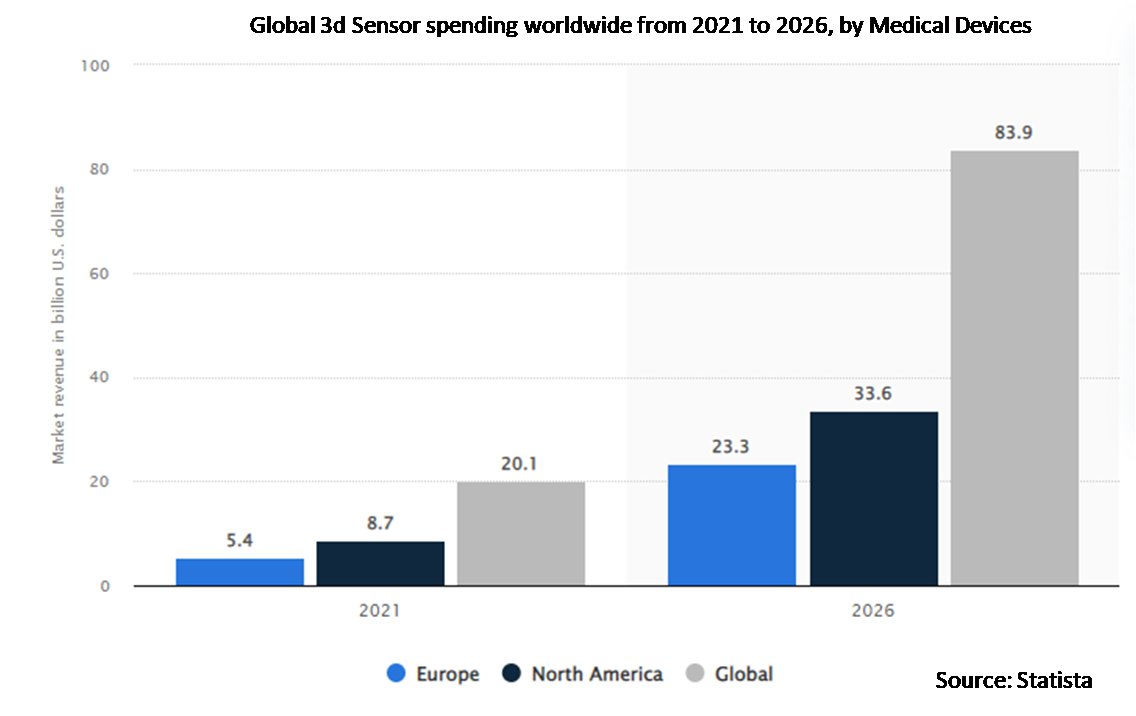 The increasing demand for enhanced visual effects has led to the introduction of various 3D-enabled devices in the consumer electronics market such as cameras, 3D media players, 3D gaming consoles, 3D portable devices, 3D TV displays, 3D desktop PCs, and notebooks. The availability of 3D content is increasing in step with the increasing demand for 3D-enabled devices, thereby driving the market growth. To this end, Apple Inc. is planning to strengthen its partnership with Sony Corporation for 3D sensors supply. Moreover, the growing need for security and surveillance is also contributing to market growth as it is widely used in cameras.

The expensive cost of 3D sensing technology is predictable to hamper the growth of the market. The rise in the manufacturing cost of image sensors and limited integration with other devices acts as the major factor among others restraining the market growth, and will further challenge the market. Images captured using low-megapixel cameras have numerous drawbacks. The image quality of such images reduces while zooming in, cropping, or taking prints. Hence, the demand for high-megapixel cameras is growing. Manufacturers either have to increase the chip size or shrink the pixel pitch to increase the number of pixels. A larger chip size incurs a higher cost, so the only way to produce an image with high resolution and low cost are to shrink the pixel pitch, which is a complex and expensive process.

Innovative technological advancements in 3D sensors are predictable to create massive opportunities for the growth of the market in the upcoming years. It is used in consumer electronics for the measurement of objects or scenes in three dimensions. This technology is gaining traction in consumer electronics, particularly in smartphones and tablets for facial recognition. Its use in smartphones serve as high-quality 3D scanners. Apple introduced the iPad Pro with a 3D depth sensor capable of facial recognition in March 2020. In 2019, Microsoft introduced a new device, Kinect, with a 3D depth sensor for personal computers. Depth sensors can capture large quantities of 3D data. This feature also enables a user to make changes in the picture and provide the data of the surroundings. Depth sensors can effectively measure distance and, thus, help in navigating routes. A 3D selfie with a depth sensor-enabled smartphone helps gain information regarding body measurements. This helps retailers understand the fitting of clothing and shoes virtually; therefore, this feature would support online shopping and customized clothing.

Necessity of Huge Amount of Power

It requires a large amount of power to capture the data, after which they process the captured data and filter it. The data is filtered until a user gets the required information. This process takes place within the sensor and consumes a large amount of energy. Sometimes, the process takes place within the server; this leads to the consumption of extra power to send the captured data to the server and then process it. Microsoft Kinect consumes 12W; however, as the data processing in it is done using a computer, the power requirement goes beyond 12W. The data sent from sensors to servers poses the risk of data security being breached.

3D sensor technology has proven to be useful in the automotive sector as it can be used by long-distance drivers to monitor personal behavior. This device can be placed inside the interior of the truck which detects the driver’s motion and warns if they seem to be sleeping while driving. The ability to build a comprehensive 3D map of the environment and the objects within it involves capturing a wide variety of data from what is happening hundreds of meters down the road to know how driver alertness.

The growing use of image sensors in smart cameras and smartphones is predictable to bolster the growth of the segment during the forecast period. Image sensors are increasingly being used in digital cameras, camera modules, and other imaging devices. Companies such as Apple Inc. (US), Google Inc. (US), and Microsoft Corporation (US) incorporate 3D image sensors into smartphones, tablets, laptops, and other devices. In 2020, Apple’s iPhone was launched with ToF 3D sensors. In March 2019, Samsung launched a new smartphone model, S10, with Qualcomm's 3D Sonic fingerprint sensor, which was also present in its next-generation smartphone. These developments in smartphones are expected to boost growth.

The Asia Pacific is projected to hold the highest market share, due to the rise in the application of 3D sensors in gaming, medical device manufacturing, automobiles, and consumer electronics. China is dominating the Asia-Pacific market in terms of installation, which in turn boosts the demand for the market in the province. China is the largest market globally for its implementations. Given the steady rise in income among Chinese consumers on average, the proportion of luxury vehicles among the population will also increase, giving way to more high-end vehicles equipped with OEM 3D sensor systems. In 2016, China was the largest manufacturer of passenger cars in the world. This steep rise in production can be attributed to the burgeoning numbers of local OEMs along with setting up manufacturing plants of global automobile manufacturers.

North America is projected to have the highest CAGR, owing to the great demand coming from the consumer electronics and automotive sectors, which have been employing 3D sensors for multiple applications in their domains. Moreover, Apple's product, iPhone is playing a significant role in increasing the demand for smartphones in the United States. Also, in Canada, a trend of people keen on trying innovative technology is on a rise. Extensive usage of 3D sensors in industries likes electronics and automotive in this region is expected to propel the growth of the market. Additionally, the rising demand for enhanced image excellence and face recognition sensors in smartphones among people living in this region is further expected to augment the growth of the regional market. 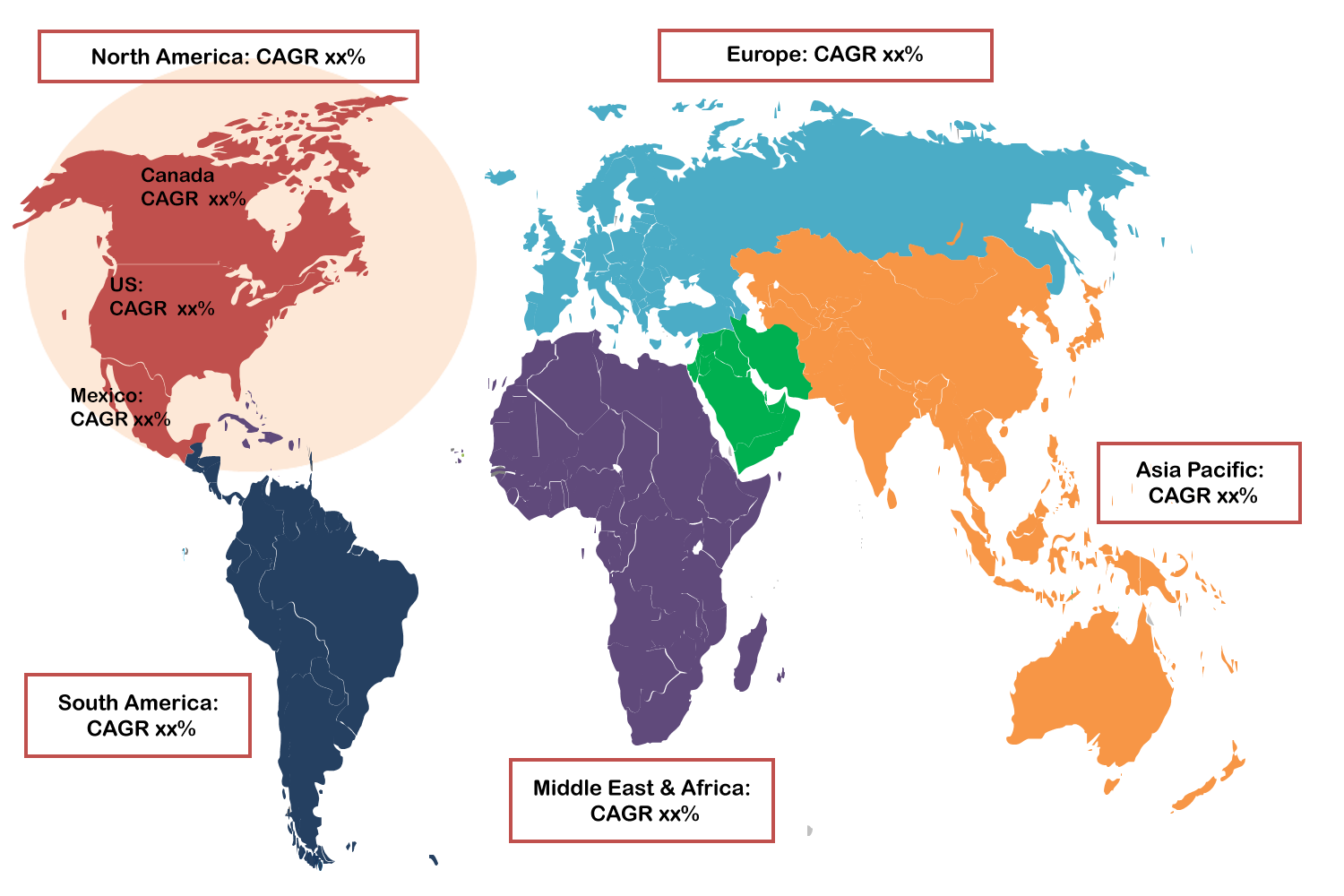