According to Stratistics MRC, the Global Lidding Films Market is accounted for $2,871.09 million in 2021 and is expected to reach $4,610.34 million by 2028 growing at a CAGR of 7.0% during the forecast period. Lidding films are usually used for covering trays, tubs, etc. due to its high tensile strength, heat resistance, and stability. It also increases the shelf life of the product owing to its high barrier resistance. Lidding films are also process optimized which helps in giving a cost effective product due to the cheaper raw material. 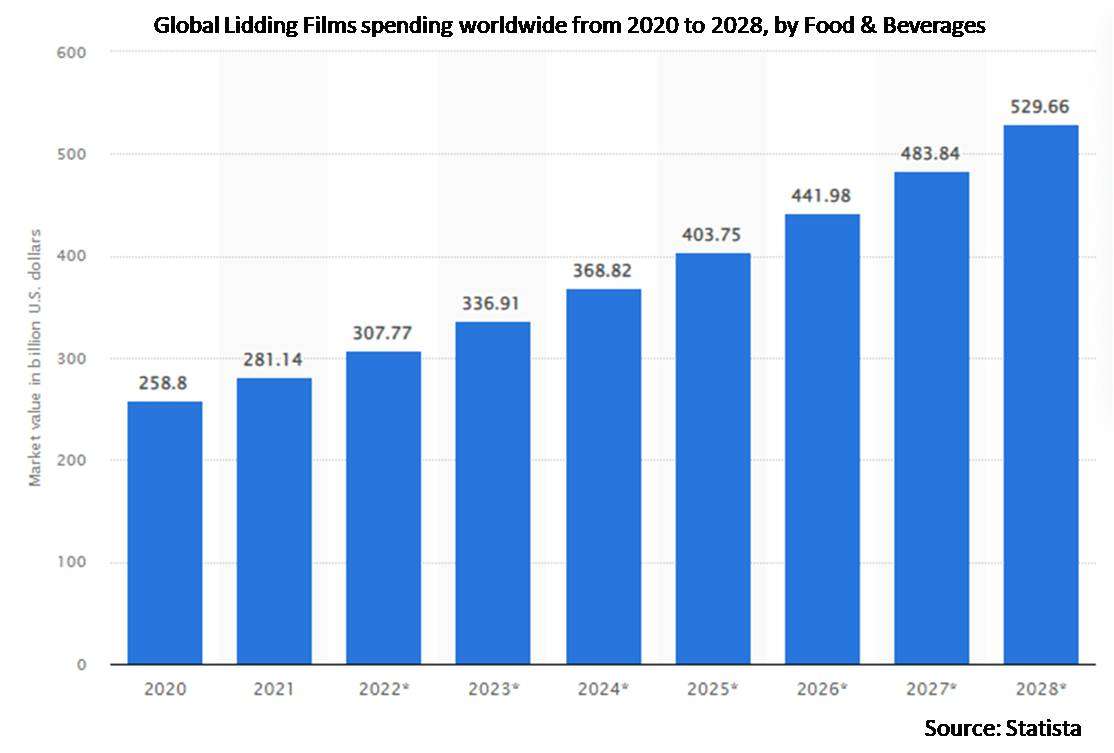 Increasing use of lidding films in food packing

Lidding films help to retain the taste and freshness of food for a long duration and also preserves the entry of carbon dioxide as well as release oxygen from the box. Hence, they are increasingly used in food packaging. Besides, the demand for biodegradable and eco-friendly lidding films is also adding to the market growth. The use of materials such as tapioca, corn starch, and sugar cane are in great demand.

Government regulations on use of plastic disposals

The environmental regulations regarding the usage of plastic from the government may act as a market restraint over the forecast period. Plastics have several toxic constituents among which are phthalates, poly-fluorinated chemicals, bisphenol A (BPA), brominated flame retardants and antimony trioxide which can leach out to have adverse effects on environmental and public health. Plastics in electronic waste (e-waste) have become a serious global environmental and public health concern due to its large production volume and the presence of inadequate management policies in several countries.

The rise in the number of online retail websites and the rising use of online goods will offer robust opportunities for the lidding films market in the forecast period. Customers today have more faith in online food products over grocery goods. The increasing drive to use online retail websites has led to the growing need for lidding films. The coronavirus (COVID-19) pandemic continues to have a significant influence on e-commerce and online consumer behavior around the world. As millions of people stayed home in early 2020 to contain the spread of the virus, digital channels have become the most popular alternative to crowded stores and in-person shopping. In June 2020, global retail e-commerce traffic stood at a record 22 billion monthly visits, with demand being exceptionally high for everyday items such as groceries, clothing, but also retail tech items.

COVID-19 pandemic reduced chemical and plastic plant productivity because of its effects on staffing. Production schedules have had to compensate for the sudden unavailability of symptomatic employees and employees going into quarantine. Even the price of common plastic film packaging increased as there is insufficient supply, lower production capacities, and expensive logistics. The shortage of raw materials has hence posed a serious threat on the market growth.

There is a growing need for food and beverages owing to the increasing population around the world. The food products that are packaged using lidding films contain less preservative over canned food products. Thus this has boosted their acceptance among the health-conscious consumers. The transparent barrier packaging film is a highly preferred material to pack vegetable, sausages, meat, and some beverages in the food industry. Businesses that most commonly employ lidding films include food manufacturers, supermarkets, and other companies working in food production. These businesses use lidding films to increase shelf life and prevent contamination of the products being packaged.

The high barrier lidding films segment is growing significantly owing to its alluring features such as attractive packaging, high performance, and light weight nature. High barrier lidding is often a laminated construction, made up of foil, paper, polyester, PET, or all kinds of other metalized and non-metalized materials that make up the film. They are designed to provide a safe condition to food products in order to increase their shelf life. They act as barriers to preserve the food quality and product integrity as packages made with plastic are permeable to gases, vapor, aromas, flavor, and additives. Growth of packaged food & beverages along with a significant rise in the consumption of packaged meat is likely to drive the high barrier lidding films market in the forecast period. Additionally, a rise in FDIs, and an increase in urbanization in the food & beverage sector, majorly in India, China, and South Korea are possible to provide significant opportunities to manufacturers of high barrier lidding films market.

North America is projected to hold the largest market share in the lidding films market during the forecast period. Increasing need for consumer goods and packaged food and increasing applications for high barrier lidding film packaging in the region are adding to the global lidding films market share in the region. The regional growth can also be attributed to substantial demand and supply. Further, the rising demand for packaged food & beverages and the presence of supermarkets and hypermarkets in almost all the cities is driving the growth in this region.

Asia Pacific is projected to have the highest CAGR during the forecast period. The region will have admirable growth over the forecast period. Rapid growth in packaging industry, growing urbanization and industrialization in India and China, the easy availability of low labor cost and raw materials, and industrial development are adding to the global lidding films market share in the region. The region is witnessing an increasing demand for packaged food & beverages in countries such as South Korea, India, and China. They are likely to create a notable demand for lidding films.

In August 2021: Amcor announced the launch of a proprietary healthcare lidding technology that will be utilized for combination products – those consisting of two or more regulated components (device, drug or biologic). This latest innovation from Amcor is based on a patented inert film development and laminate design. It provides a lidding solution that can withstand heat sterilization, the process of preserving and sterilizing items, while preventing drug uptake into the packaging.

In March 2017: Constantia Flexibles Group has agreed to acquire Italy’s leading dairy lidding company, TR Alucap S.r.l., for an undisclosed amount. The transaction has been completed with immediate effect.

In February 2017: Mondi Group, which makes food and beverage packaging, has acquired Excelsior Technologies for $40m, to further grow its consumer packaging business.

In July 2016: Toray Plastics announced the introduction of LumiLid® XL7AF film, an anti-fog, easy-to-peel PET lidding film for use with fresh and refrigerated food that is packaged in polypropylene (PP) trays, including mineral-filled PP trays.