According to Stratistics MRC, the Global Optoelectronic Components Market is accounted for $42.54 billion in 2021 and is expected to reach $61.88 billion by 2028 growing at a CAGR of 5.5% during the forecast period. Optoelectronic components are electronic components that identify and control light, and changes over electrical signs into infrared or visible energy or vice versa. It is utilized in electric eyes, screen and control circuits, photovoltaic force supplies, and optical fibres communications systems. Infusion laser diodes and quantum course lasers use optoelectronic components for stimulated emission. Picture sensors and LEDs are utilized for safety purposes, packaging, and digital imaging systems. 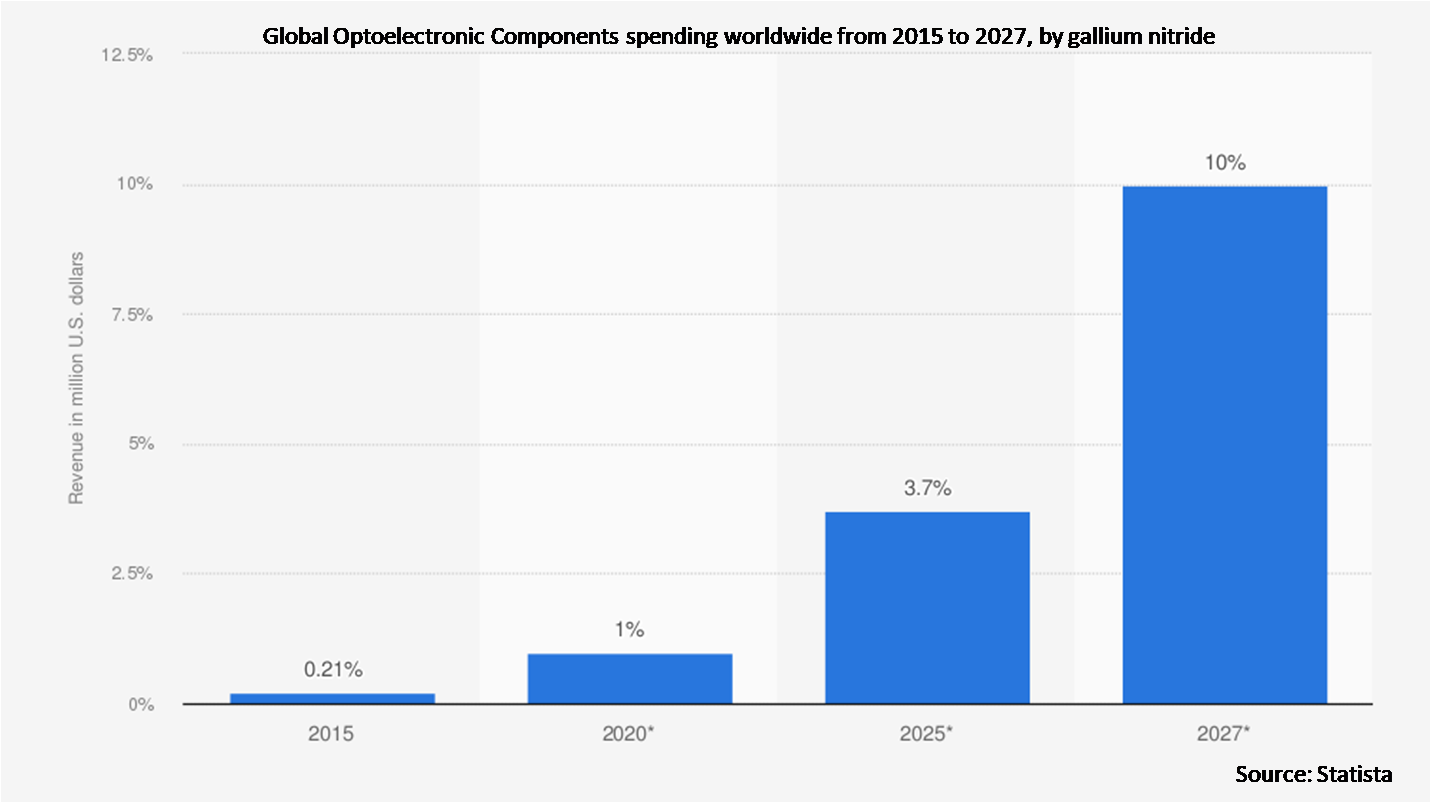 Optoelectronics is a critical part of several advanced technologies. Healthcare and automotive are the prominent industries that have started adopting optoelectronics in recent years. The use of optical sensors for biosensing applications in the healthcare industry allows for monitoring the heart rate and the functioning of other vital organs in a human body. Thus, the use of non-intrusive, inexpensive sensors across advanced healthcare applications has led to a paradigm change in consumer wellness. Current medical applications that use optoelectronic sensors include pulse oximetry, measuring the amount of oxygen in the blood, heart-rate monitors blood diagnostics, such as blood glucose monitoring; urine analysis, and dental color matching.

The advancements in Li-Fi technology which allows data transmission via light sources to overcome the challenges faced by the 5G and Wi-Fi technologies, is expected to create huge growth prospects for the optoelectronic components in the near future. Because of its capacity to transport data by light, this technology is much more energy-efficient than other wireless data transmission systems. As a result, industry participants in the optoelectronic components market will have more opportunities to grow. The advanced smartphones and wearable with intuitive displays and camera technology is driving the demand for optoelectronic components. Moreover, the high-tech cameras also demand image sensors with the capability to capture precise high-quality images, further spurring the market growth.

Huge dip due to the pandemic

The outbreak of the COVID-19 pandemic had a significant impact on public health as well as businesses. To stop the spread of the virus, governments worldwide imposed lockdowns, consequently shutting down on-premise business processes and manufacturing operations and disrupting supply chains and production schedules. This scenario led to a demand-supply gap of components required in residential and healthcare applications. The demand for optoelectronics witnessed a dip due to the shutdown of consumer electronics, automobile, industrial, and other manufacturing facilities across the globe. In addition, Asia-Pacific being the hub of semiconductor manufacturing and China, the epicenter of the virus outbreak, led to huge losses during the first and second quarters of 2020.

The sensors segment is estimated to have a lucrative growth due to the high adoption of various sensors such as photodiodes, image sensors, and optical sensors across various industry verticals. The use of optical sensors in the textile industry offers improved safety; CMOS image sensors are used in cameras, spectroscopy, and LiDAR systems; and plasmonic color sensors are used for LED monitoring and colorimetry, among other applications. Thus, the adoption of various sensors across a wide application area contributes to the sensors segment’s highest share among devices in the optoelectronic components market.

The gallium nitride segment is anticipated to witness the fastest CAGR growth during the forecast period. Gallium nitride is a high electron mobility transistor (HEHT) material that is used as a basic component for optoelectronic components, which are superior to older silicon-based optoelectronic components. Gallium nitride finds application in LEDs, which are widely used in general lighting and commercial lighting. The ability to withstand high temperatures and voltages makes gallium nitride ideal for imaging and sensing applications. GaN is used in LEDs, power devices, RF components, lasers, and photonics applications. Thus, the need for enhanced efficiency, minimized power consumption, and lower system costs contributes to the GaN segment’s largest share among other device materials in the optoelectronics market.

North America is projected to hold the largest market share during the forecast period. North America is one of the most technologically advanced markets for optoelectronic components owing to the presence of prominent system suppliers, large semiconductor companies, LED, laser, and sensor manufacturers in the region. The US, Canada, and Mexico are the major contributors to the growth of the market in North America.

Asia Pacific is projected to have the highest CAGR over the forecast period due to the evolving automobile, medical, and industrial manufacturing companies and also the rising demand for optoelectronic components from the overseas markets of North America and Europe. South Korea, Japan China, and India are the major contributors to the growth of the market in Asia Pacific. In addition, Asia-Pacific is the hub of semiconductor component manufacturing, and the region houses the majority of key players operating in the optoelectronic components market such as Rohm Co., Ltd, Hamamatsu Photonics K.K., Samsung Electronics Co., Ltd., Sony Corporation, Panasonic Corporation, and Sharp Corporation along with other small regional players. Furthermore, growth in the healthcare, consumer electronics, and automotive industries is further expected to propel the demand for optoelectronic components in the region.

In July 2021, Sharp Fukuyama Semiconductor Co., Ltd has developed the GP2AP130S00F proximity sensor, the industry’s smallest in class for wearable devices that supports the I2C communication protocol. The wearable device market is a growing field that includes TWS*4 earbuds used with smartphones, as well as VR goggles and smart glasses that are expected to enter widespread use in the future, and devices equipped with biometric information monitoring functions.

In February 2019, Osram acquired Ring Automotive, a British manufacturer and distributor of vehicle lighting and auto-electrical parts. The acquisition enabled OSRAM to strengthen its expertise in automotive lighting and tap into additional sales potential by utilizing the distribution channels of Ring Automotive.