According to Stratistics MRC, the Global Space Debris Monitoring and Removal Market is accounted for $945.67 million in 2022 and is expected to reach $1599.13 million by 2028, growing at a CAGR of 9.15% during the forecast period. Space debris is any type of machinery or debris that humans leave in space that is no longer functional. Space debris can range in size from a rock to a microscopic chip. Space debris includes spent rocket stages, dead or failing satellites, and other man-made objects that have been left in orbit. The growing population of space debris poses a risk to all space vehicles, including the International Space Station. Controlling the increased population of debris in space is the responsibility of space debris removal companies.

According to NASA, there are over 30,000 objects larger than a softball in orbit, travelling at speeds of up to 18,000 miles per hour. At that speed, any of these objects could completely destroy a spacecraft. Furthermore, rising investments in space-related projects, as well as an increase in satellite launches, will provide ample opportunities for growth for vendors in the space debris monitoring and removal market. 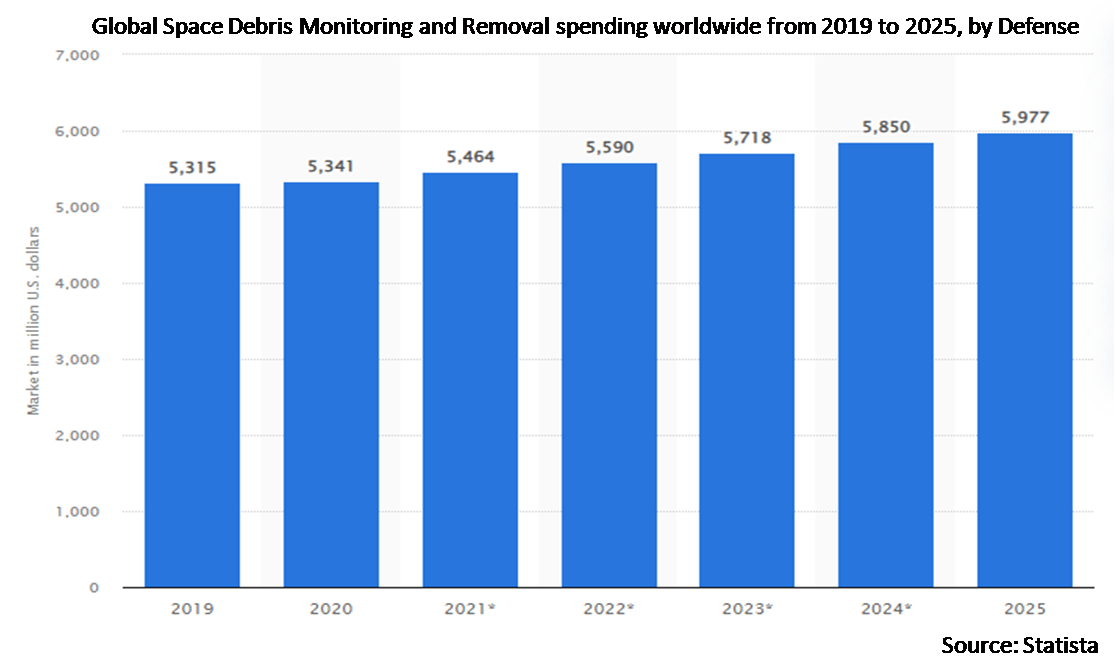 Over the last few years, the abrupt increase in demand for network and communication and network-based services around the world has enabled space launches. The Starlink programme presented by SpaceX has received approval from the United States Federal Communication Commission (FCC) to unveil a 12000 startling small satellite constellation for the internet. However, the company is starting to organise a spectrum in order to add a stunning 30000 satellite in the future. Furthermore, in the last five years, orbital launch attempts have increased significantly in countries such as the United States, Russia, China, Japan, India, and France. There are approximately 3,373 active operational satellites in Earth's orbit, with a significant increase expected in the coming years.

Space debris mitigation and protection measures are expensive for satellite operators, but the main risk is that debris generation spirals out of control, rendering certain orbits unusable for human activities. It is expensive to protect satellites from space debris, beginning with design measures, the need for surveillance and tracking, moving operational satellites out of harm's way, and even replacing missions entirely. According to the OECD, such costs amount to 5-10% of total mission costs for geostationary satellites, which could be hundreds of millions of dollars. The cost of inaction, on the other hand, would be far greater. If there is enough debris in orbit, it may eventually cause the 'Kessler syndrome,' in which collisions cascade, leading to more and more self-generating collisions.

Increased investments in space tourism will be a major factor driving the growth of the space debris monitoring and removal market size. The concept of space tourism, which will allow passengers to travel to space, has been enabled by technological advancements and the completion of a few successful launches. Through orbital flights, people can see the Earth from space and experience specific aspects of space, such as weightlessness or the zero gravity effect. Space tourism is catered to by companies such as Virgin Galactic, SpaceX, and Blue Origin. Such advancements in space tourism, as well as the high risk of colliding with space objects, will necessitate the use of space debris removal systems during the forecast period.

The National Aeronautics and Space Administration (NASA), the China National Space Administration (CNSA), the European Space Agency (ESA), the Russian Federal Space Agency (Roscosmos), the German Aerospace Center (DLR), the Centre National d'Etudes Spatiales (CNES) (France), and other space agencies have defined a set of regulatory norms to curb space debris through monitoring and removal. However, the majority of the norms are limited to the monitoring of space debris. The key agencies and governing bodies do not specify or draught debris removal standards, which is hindering market growth.

For a long time, government and space-based agency programmes dominated space activities. However, over the last few years, activities related to exploration have gradually shifted to the phase of space exploitation. Furthermore, the COVID-19 pandemic has had a significant impact on ongoing space programmes and operations carried out by public space-based companies. This has created an opportunity for small and medium-sized private companies to invest in and provide space-based services to the key players in space debris monitoring and removal. Orbit Guardians, a start-up based in the United States, provides active space debris monitoring and removal services. To analyse, monitor, and remove debris smaller than 20 cm in size from space, the company employs technologies such as computer vision, the Internet of Things (IoT), and Artificial Intelligence (AI). As a result, the pandemic hampered the growth of the space industry. However, it has also created new opportunities and will aid in the growth of market companies.

The Space Debris Removal segment is expected to be the largest during the forecast period due to rising investments in debris removal technologies which are expected to drive the growth of the space debris monitoring and removal market in this segment. Moreover, increased adoption of mitigation and removal technologies, as well as the development of new concepts in this field, will have a positive impact on the market.

During the forecast period, the commercial segment is expected to have the highest CAGR due to an increase in the number of private companies involved in space debris monitoring and removal from Earth orbit. Many Asian and European start-ups are excited about designing and developing debris removal processes in the coming years. Such factors contribute to market expansion.

North America is projected to hold the largest share during the forecast period due to the extensive R&D spending and an increasing number of space missions, which are expected to boost the region's market. When compared to European and Asian countries, the United States has the most space-based companies. Furthermore, the US Department of Defense invests heavily in space debris monitoring in order to reduce space debris in the coming years. Additionally, the presence of key space organisations such as Altius Space, Northrop Grumman Corporation, and the Boeing Company drives market growth in North America.

During the forecast period, Asia Pacific is expected to grow at a faster CAGR. The increase can be attributed to India, China, and Japan's increasing demand for space situational awareness capabilities. Through collaboration with its space network, Asia Pacific Space Cooperation Organization, Chinese firms are involved in designing and developing their optical sensor network, known as Asia Pacific Optical Satellite Observation System (APOSOS).

In January 2022, Northrop Grumman Corporation signed an agreement with the U.S. Space Force to develop radar to track active satellites and debris in high orbits. The contract is worth USD 341 million. Northrop's radar will be located in the Indo-Pacific region and will be one of three planned ground-based radar sites for the DARC program. The company has until September 2025 to develop a radar prototype

In April 2021, Northrop Grumman Corporation launched its Mission Extension Vehicle 2, a robot spacecraft designed to help prolong the life of satellites in space. The mission is designed to remove space junk from the year 2025

In April 2021, Electro Optic Systems announced that it achieved a major breakthrough in its laser technology in the global effort to mitigate space debris. The latest innovation involves the use of Guide Star Laser to allow high-speed optics to form laser beams that can track and move space debris at lower altitudes and faster speeds than ever previously possible