According to Stratistics MRC, the Global Viral Vector Manufacturing Market is accounted for $566.51 million in 2021 and is expected to reach $1,804.59 million by 2028 growing at a CAGR of 18.0% during the forecast period. Viral vectors are manufactured for delivering genetic materials into the target cells in various genetic, vaccinology, and molecular biology applications. Also, viral vectors are exploited for discovering various therapeutic areas. Viral vectors are manufactured using viruses and animal or insect cell cultures. 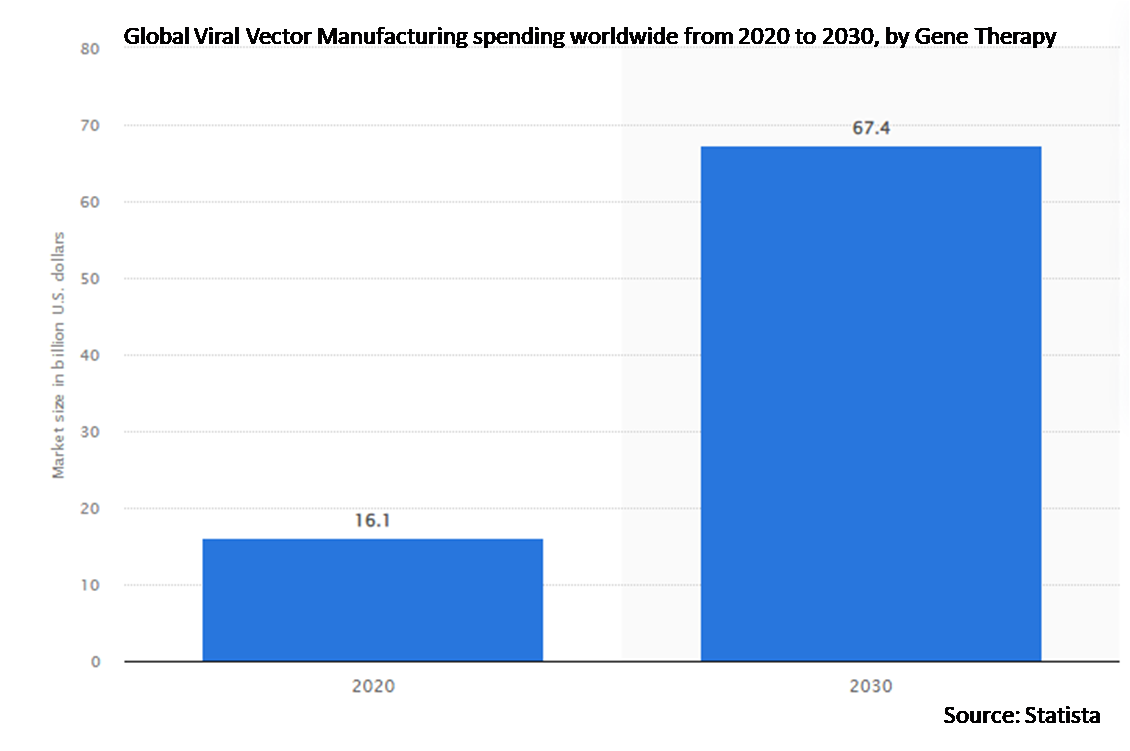 The growing worldwide burden of cancer, infectious diseases, and genetic disorders is increasing in several countries and therefore acting as the biggest driver of the market. Factors driving market growth include the increasing prevalence of genetic diseases, cancer, and infectious diseases, the increasing number of clinical trials of viral vectors, and the availability of funding for gene therapy development. The Viral Vector Manufacturing Market is growing significantly due to a rise in the number of gene therapy-based products in the market.

Viral vectors come with the disadvantage of having a short life. This is expected to have a negative impact on the growth of the market. Moreover, the high cost of gene-based medical therapies might hamper the demand for viral vectors during the forecast period.

The emergence of molecular biology is accelerating genomic sequencing that is further expected to reinforce precision medicine. The progress showcased by molecular biology and medical science are aligning gene therapy to a progressive borderline, thereby fostering the growth of the viral vector manufacturing for revolutionizing patient care. Moreover, with their increasing use in gene therapy for the treatment of several diseases such as cancer, metabolic diseases, and others, the demand for viral vector manufacturing is projected to rise.

The increasing involvement of the research community in gene and cell therapy research activities is expected to increase the demand for viral vectors in the global market. An increase in the introduction of advanced therapies along with the rising number of gene therapy-based R&D programs by companies, pharmaceutical, and biopharmaceutical companies are emerging as the significant end-users of the market for viral vectors and plasmid DNA manufacturing. For instance, Abeona Therapeutics is one of such companies that is actively evaluating AAV9-based gene therapies for CLN1 and CLN3 diseases.

North America is projected to hold the largest market share owing to the high adoption rate of new therapies and the high incidence rate of cancer. The increasing prevalence of genetic and other chronic disorders, an aging population, growing demand for targeted and personalized medicine, and favorable government initiatives are the factors responsible for future market growth in the region. Many companies have been expanding their facilities and investing a significant amount of capital in the region. Educational and academic institutes have also been at the forefront of R&D investment. For instance, Harvard University announced that it was collaborating with contract development and manufacturing organizations (CDMOs) to develop a USD 50 million cell and viral vector manufacturing facility. Such initiatives are expected to boost the market growth in North America.

In January 2021: Fujifilm Corporation announced plans to invest USD 40 million, which will be used to establish a new processing facility for viral vector manufacturing and associated research.

In December 2020: Shape Therapeutics launched an innovative capsid discovery platform designed to improve the delivery and safety of gene therapies. The platform could generate adeno-associated virus (AAV) vectors that are tissue-specific.

In April 2020: Merck KgaA and its subsidiary MilliporeSigma announced plans to spend USD 110 million to open a second viral vector facility at its Carlsbad, California facility.