According to Stratistics MRC, the Global Fuel Cell Market is accounted for $2.9 billion in 2022 and is expected to reach $12.75 billion by 2028 growing at a CAGR of 28% during the forecast period. A fuel cell uses the chemical energy of hydrogen or other fuels to produce electricity in a clean and effective manner. When hydrogen is used as a fuel, the only by-products are water, power, and heat. There are numerous uses for fuel cells, including in commercial, residential, and transportation infrastructure. Compared to conventional combustion-based technologies, which are used in many power plants and automobiles, fuel cells have a number of advantages. Fuel cells produce less or no emissions when compared to combustion engines. Hydrogen fuel cells can contribute to resolving pressing climate challenges because they emit only water and no carbon dioxide.

According to a 2019 estimate from the International Council of Chemical Associations, the chemicals industry is one of the largest in the world, contributing US$ 5.7 trillion to global GDP and supporting nearly 120 million employments. In order to reduce the negative environmental impact of chemical manufacture, chemical industries are progressively embracing sustainable and eco-friendly procedures. Chemical companies are using an eco-friendly alternative such as using carbon dioxide from the atmosphere to make fuels, industrial products, and other chemicals. Technological advancements and the development of chemical sciences are playing a major role in this transition in the industry. 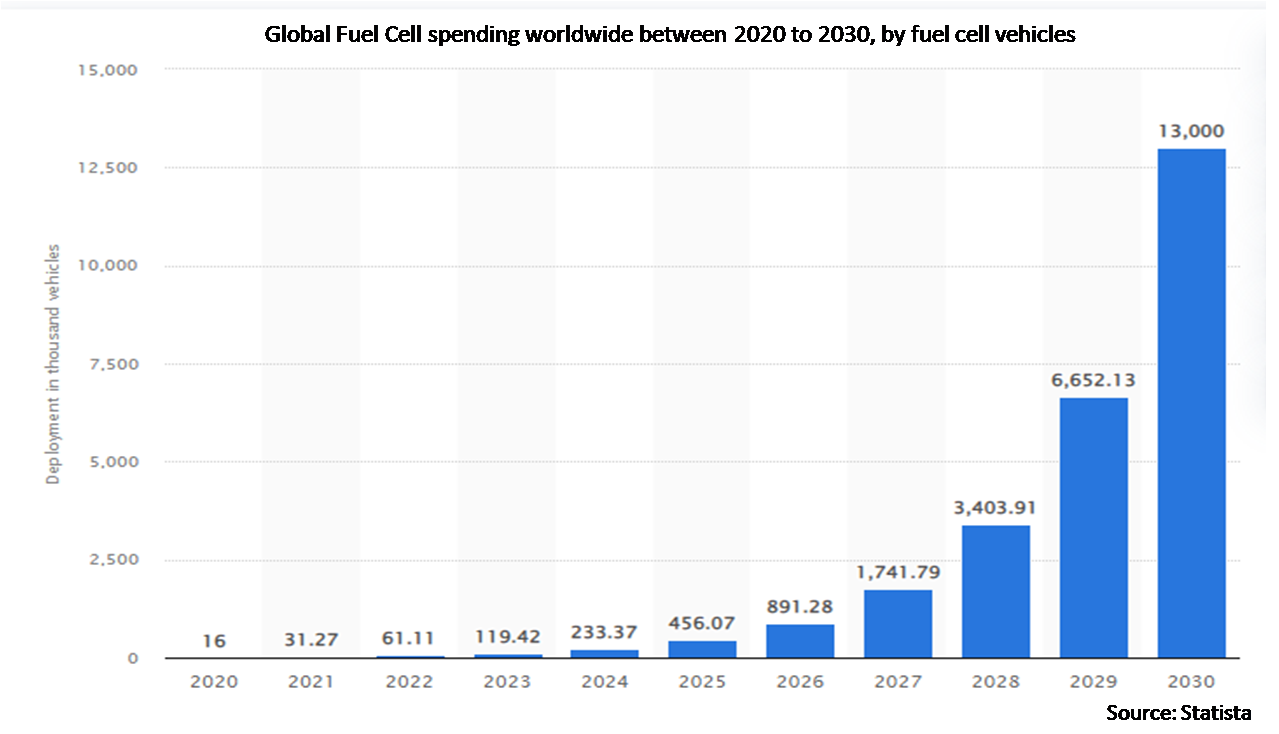 The global fuel cell market is expanding as a result of more fuel cells being used in the transportation industry, including in vehicles and buses. However, the expensive cost of the catalyst employed in it, which drives up the cost of the fuel cell, somewhat restrains expansion. But it is anticipated that rising portable device demand, strict government rules meant to cut down on rising pollution levels, and improved fuel cell efficiency would lead to prosperous business opportunities.

Bipolar plates, catalysts, membrane electrode assemblies (MEAs), gaskets, and other parts are among the many components needed in the production of fuel cell systems. Because of this, these products are quite expensive, and making a limited number of fuel cell systems could result in unaffordable high expenses for the corporations that make them. Additionally, the business prospects may be hampered by certain countries' restricted access to the essential, highly advanced hydrogen infrastructure. To close the gap and provide manufacturers and customers with zero-emission technology, the government sectors, however, are constantly taking action to introduce financial assistance & benefit.

In order to power and heat modest homes, as well as commercial facilities including hotels, hospitals, schools, and other public buildings, fuel cell systems are progressively being deployed. In order to encourage the integration of the devices in many applications, several state and federal authorities have developed favourable legislative frameworks and subsidy schemes. For instance, the state of New Jersey's government has upgraded its financial incentives for FC CHP installations. Its CHP-FC Program framework aims to encourage more manufacturers by providing financial assistance for each project to the procedures.

Although internal combustion engines are discovered to be good substitutes for unfriendly internal combustion engines, the use of fuel cells in various industries has not yet replaced the use of conventional forms of energy, which is restricting the growth of the fuel cell industry. Additionally, in order to capitalise on the demand, which is accelerating, the providers are working to optimise the pricing in accordance with end-user criteria. The dependability of fuel cells is another aspect that is limiting the growth of the customer base. Manufacturers are investing heavily in research and development, though, and the fuel cell market is likely to see some advances in the future.

The market for stationary fuel cells is still mostly dominated by a small number of companies, which distribute hydrogen fuel cell generators in accordance with regional demand. The Covid-19 epidemic coincided with restrictions on human and logistical travel, which negatively affected the market for stationary fuel cells by lowering sales and consumer demand for hydrogen electric generators. The lack of sufficient raw materials and labour force also had an impact on the market, reducing sales by reducing production capacity. Because the development of hydrogen fuel cell technology is still in the process of being improved to make it more flexible, different public institutions' and private businesses' development initiatives have been put on hold.

The portable, stationary, and transit application categories make up the segmentation of the global fuel cell market. Due to the increasing use of fuel cells in stationary applications, the stationary segment is anticipated to have the greatest CAGR throughout the projection period. In stationary applications, fuel cells are frequently utilised to produce energy for distributed generation and auxiliary power. Some fuel cells can be used as cogeneration systems in houses, hospitals, swimming pools, and other structures since they can provide both electricity and heat. The best stationary fuel cell systems use the PAFC, MCFC, and SOFC fuel cell technologies. Additionally, stationary fuel cell systems are used as stand-alone power plants for cities and towns as well as backup power and power in remote locations.

The largest market share in the world is anticipated to be held by Asia Pacific during the forecast period. This is because there is a growing market for FC vehicles and a quickly evolving hydrogen infrastructure. Additionally, some nations have set attainable objectives to convert the current energy infrastructure and reliance on fossil fuels to carbon-free power generation. Important countries have a presence in the area. The market will grow as a result of significant investments in the research and development of cutting-edge FC systems and the implementation of established technologies. To encourage the adoption of new technology, certain nations have made significant investments in enhancing the infrastructure for hydrogen refuelling.

In the worldwide fuel cell industry, Asia-Pacific had the highest CAGR , and it is anticipated that it would continue to dominate the market for the duration of the forecast. Consumer awareness is rising, and the number of applications available is expanding, which is fueling market expansion in the area. The expansion in this region is anticipated to be fueled by a growing usage of fuel cells in stationary and stationary applications, a large increase in power demand, and an expanding penetration of fuel cell electric cars. 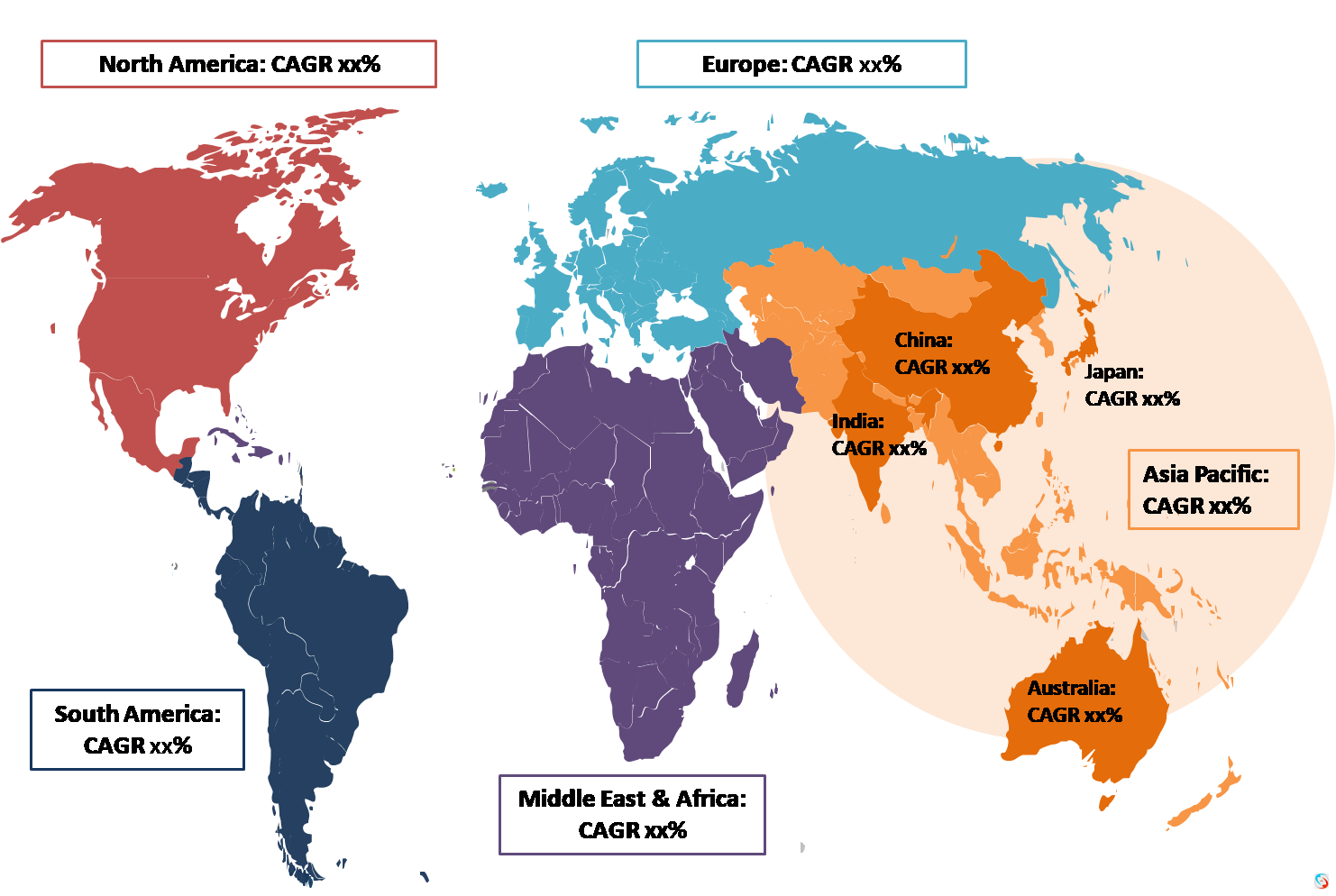 Hydrogenics opened a new facility in California, in October 2018. The facility’s primary goal would be the integrate hydrogen fuel cell systems onto heavy duty truck and bus platforms for California customers. Hydrogenics was able to improve its position in the U.S. market due to the establishment of this manufacturing plant.

Plug Power introduced a new plant in March 2019 to expand its hydrogen-based fuel cell line. The ProGen 30kW engine is a cost-effective solution for electric vehicle, with high utilization and reliable performance in severe settings, as well as quick fueling and zero emissions.

SFC Energy entered into a contract with Aurora Hut, Finnish Company, in October 2019. Aurora Hut will include the EFOY fuel cells into its new all season igloo houseboats for highly customized trips under the terms of the deal. In all igloos, the fuel cell provides a fully automated and ecologically beneficial power source.