According to Stratistics MRC, the Global Gluten-free Soups and Sauces Market is accounted for $2.51 billion in 2022 and is expected to reach $4.28 billion by 2028 growing at a CAGR of 9.3% during the forecast period. Soups and sauces labelled as gluten-free are those that don't include any ingredients that contain gluten. These soups and sauces are suitable for the gluten-intolerant community because they were produced without any cross-contamination from gluten-containing ingredients.

According to the Ministry of Health, 182,858 Italians were diagnosed with celiac disease in 2017, compared to 172,000 in 2014, an increase of about 6%. Owing to the rising prominence of celiac disease among the population in the country, consumers are getting motivated to switch to gluten-free products, including soups and sauces. Furthermore, the pasta sauce market has registered remarkable growth over the last few decades, owing to increasing per capita consumption of pasta throughout the country. 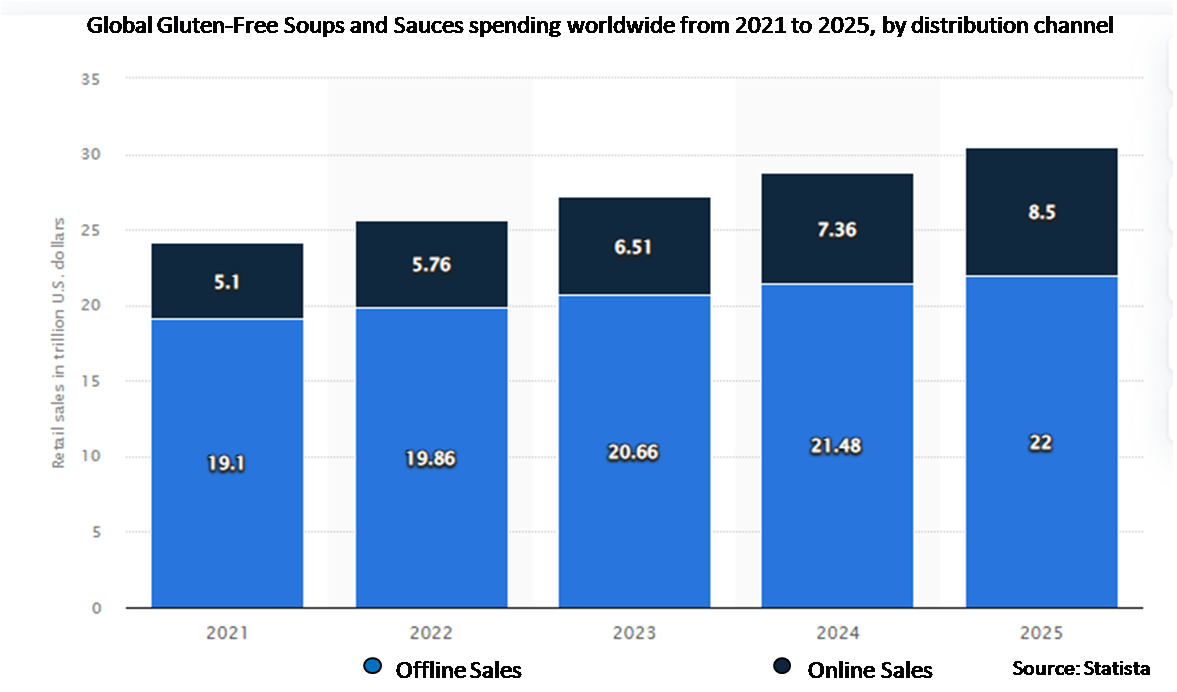 Increased diagnosis of celiac disease and other food allergies

Celiac disease, often known as gluten intolerance, is an autoimmune condition that harms the lining of the small intestine and impairs the absorption of nutrients from food. The demand for gluten-free products is fuelled by the fact that the only approach to treat celiac disease at this time is to consume gluten-free foods and stay away from gluten-containing ones. In addition to the rise in celiac disease diagnoses, people with other illnesses like non-celiac gluten sensitivity, inflammatory diseases, and autoimmune disorders are driving demand for gluten-free products. Furthermore, the public has been made more aware of the need for gluten-free foods in practically all regions by government awareness campaigns, initiatives, and programmes concerning celiac disorders and the establishment of labelling for gluten-free items.

Although the world is changing toward gluten-free dietary patterns due to a variety of health benefits, a gluten-free diet is not necessarily a healthier diet. Gluten-free flours can be extremely processed, lacking in fibre, and have a high glycemic index. These flours are then used to create gluten-free foods including breads, spaghetti, pizza, and other bakery goods (GI). Sometimes lipids and sugar are extra added to these gluten-free products or flours to mimic the flavour, texture, and feel of conventional gluten-containing ingredients, which can have negative effects on people's health.

Adoption of micro-encapsulation technology to improve the shelf-life

Gluten proteins are in charge of controlling and retaining moisture in traditional gluten-containing foods and food products, which gives them a comparatively extended shelf life. The products tend to have a shorter shelf life and, in most cases, losing its textural appeal when they are made gluten-free, though, in order to meet the growing demand of end users around the world. One such cutting-edge technology that can help producers achieve this goal of extending the shelf life and texture of their assortment of gluten-free products is microencapsulation.

It is quite challenging to transition a consumer to a gluten-free diet and lifestyle. For a variety of reasons, including the difference in texture, flavour, and taste, most people are unable to adjust to it. The maker must guarantee that the nutritional value, flavour, texture, appearance, cost, and shelf-life all meet the requirements demanded by consumers in addition to locating and sourcing substitute chemicals to bind the ingredients together. Manufacturers must ensure that there is maximum resemblance in the products in order to reduce end consumers' resistance to changing their dietary habits to gluten-free products because there are variances between the original and these items.

It is anticipated that the COVID-19 pandemic will have a moderately negative effect on the market. Manufacturers are unable to obtain the raw materials needed to produce the items needed to meet demand as a result of the limited supply chain activity. In addition, because of government initiatives like lockdowns and the shortage of labour, manufacturing factories came to a standstill. Due to the limited international commercial activity, multinational corporations are having difficulty importing and exporting finished goods. Collectively, all these variables have had a negative effect on the entire supply chain, which has a negative influence on the market. However, due to the rise in consumers who prefer gluten-free, it is anticipated that the market for gluten-free products would have an upbeat growth trend following the pandemic.

The Solid form segment is estimated to have a lucrative growth, due to these goods produce gluten-free goods on a huge scale to meet consumer demand around the world. Leading companies that produce a solid form of a line of items that are gluten-free. The solid form is expected to be the largest during the forecast period.

The conventional stores segment is anticipated to witness the fastest CAGR growth during the forecast period, due to a wide range of customers opted to buy gluten-free goods from conventional stores. This is due to elements including the simplicity of getting to stores, the availability of different product categories, and frequent shopping locations. Due to this, the sector has accounted for the most market share in terms of distribution channel for gluten-free products globally, and it is also expected to develop at the highest CAGR in the upcoming years.

Asia Pacific is projected to hold the largest market share during the forecast period owing to they have a positive outlook on both consumption and market size. The majority of Asia-Pacific nations have seen their currencies rise in value against the US dollar, so the short-term picture is still favourable across markets. Furthermore, the Asia Pacific Gluten-free Soups and Sauces market will have robust growth over the long term, supported by the region's favourable demographic profile and an increase in the number of households with middle-to-high incomes. Consumers are also swiftly shifting their purchasing priorities away from necessities, which will aid in the expansion of the Asia Pacific gluten-free soups and sauces market.

North America projected to have the highest CAGR over the forecast period, owing to the rising taste preferences of consumers in the area. The prevalence of numerous spices and flavours in the area is to blame for this. Soups and sauces are being used more frequently as flavouring ingredients in a variety of dishes, which helps to improve or appetising the core food products. In November 2018, Nestlé SA announced the launch of its first incubator product with soups and herbal drink in China. The name of the product is Xingshan, which is a new ready-to-drink soups and herbal drinks. This drink is made using traditional and ancient Chinese ingredients and is specially designed for the busy urban population.