According to Stratistics MRC, the Global Internet of Vehicle Market is accounted for $117.89 billion in 2022 and is expected to reach $414.27 billion by 2028 growing at a CAGR of 23.3% during the forecast period. The Internet of Vehicles (IoV) is a network that integrates three networks; a vehicular mobile internet network, an intra-vehicle network, and an inter-vehicle network. IoV is characterized as a vast dispersed system for information exchange & wireless connection between vehicle2X based on the idea of fusing different networks into one (where X includes internet, roads, people, and vehicles, among others). It employs customary data exchange and communication protocols. Intelligent traffic management, intelligent dynamic information service, and intelligent vehicle control are all provided by this integrated system.

According to the National Highway Traffic Safety Administration (NHTSA), the average commuter in the U.S. spends thirty-eight hours annually stuck in traffic. It collectively leads to 5.5 billion extra hours of travel and the purchase of an additional 2.9 billion gallons of fuel. This wasted fuel and time cost the U.S. economy around US$ 121 billion every year. 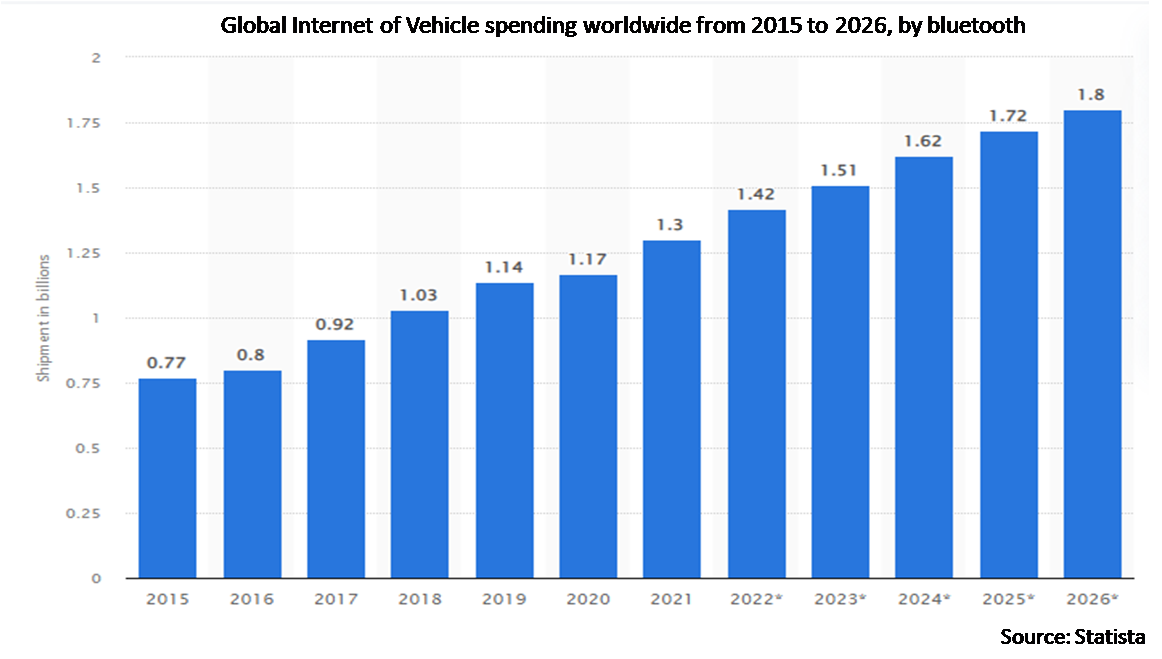 The Internet of Things (IoT) and Automotive & Transportation Policy Principles were the subject of a report issued by Intel in 2019. It was discovered that more than 90% of collisions in the US are the result of human mistake. Crash rates can be significantly reduced by connected autonomous vehicles functioning in an IoT system that, in some situations, can navigate without human input. For instance, if only 10% of vehicles were autonomous, 1,100 road fatalities may be avoided in the United States each year, saving around USD 38 billion. Similarly, if 90% of vehicles were autonomous, USD 447 billion could be saved and 21,700 traffic fatalities might be avoided. Therefore, during the time of the forecast, these factors will propel the market's expansion.

The internet of vehicles establishes a network of interconnected devices and integrates various services, technologies, and communication protocols, posing information security concerns. The system becomes susceptible to several kinds of malicious interference, including distributed denial-of-service (DDoS) assaults. They can be aimed at different places, such the vehicle itself or the network that transmits the data. In the Internet of Vehicles; its components including the accelerator, steering wheel, brakes, GPS, and alarms can all be accessible remotely, and a successful breach or hack could result in fatalities. These problems will therefore prevent consumers from adopting the internet of automobiles.

Traffic management is a major revenue source for the internet of vehicles, with applications ranging from smart traffic lights that may optimise traffic flow by evaluating the present road situation to adaptable lighting systems that take weather conditions into consideration. Additionally, sensors and beacons can direct cars to open parking spaces, and real-time information from CCTV cameras can instantly alert rescue personnel when a driver is involved in an accident. As a result, the market will rise due to the growing use of IoV in traffic and parking management.

Huge amounts of information to process

Big data is a benefit of IoV technology, but managing the continuous influx of data presents serious difficulties for providers. One gigabyte of data is processed by connected vehicles every second, and as more infrastructure items become online and require connectivity, this amount is certain to rise. Cloud computing can be hampered and the system damaged by insufficient storage or slow network speeds.

COVID-19 has Influenced Telecommunications and Connected Infrastructure Policy. Despite the pandemic's detrimental effects, particularly with regard to funding for R&D in autonomous driving, testing activities have persisted, and expectations are optimistic. Significant regulatory adjustments are being enacted, particularly in the U.S. and China, as Wi-Fi demand rises during the pandemic. China has allocated specific bandwidth for the use of C-V2X on the 5.9 GHz spectrum starting in 2020. During the predicted period, the nation also plans to deploy the system on 90% of the main roads and localities. Although adopting such policies would take a lot of time, it will encourage and reassure important parties to invest in an IoV network. As a result, COVID-19's regulatory changes will have an impact on the market's expansion.

The service segment is estimated to have a lucrative growth, as the service model generates regular revenues and, more crucially, long-term customer relationships. For instance, Volkswagen's Car-Net service costs USD 200 per year or USD 18 per month and offers consumers navigation tools, security features, and maintenance support, among other features. Therefore, these elements are to blame for this segment's supremacy.

The Wi-Fi segment is anticipated to witness the fastest CAGR growth during the forecast period, due to the successful data exchange for both low and high frequency connections, with a failure rate of less than 1%. Furthermore, in-car Wi-Fi allows for on-the-go networking through mobile hotspots and eliminates the need for cellular services. The expansion of this market segment is attributed to these factors.

North America is projected to hold the largest market share during the forecast period owing to the National Highway Traffic Safety Administration (NHTSA) estimates that the typical American commuter wastes 38 hours per year in traffic. It results in an overall increase in travel time of 5.5 billion hours and fuel purchases of an extra 2.9 billion gallons. The U.S. economy suffers a yearly loss of about US$121 billion due to this squandered fuel and time. With better traffic management and self-driving cars, the internet of vehicles network can increase productivity and efficiency. These elements will fuel the market's expansion in this area.

Asia Pacific is projected to have the highest CAGR over the forecast period. In Japan, supportive regulatory measures are being put in place to facilitate IoV architectural testing and expand engineering capability. China is also the world leader in 5G networking in terms of adoption rate and implementation due to the country's early launch. Additionally, the nation is swiftly developing new IoV technological standards and federal-level regulations. As a result, these elements are to blame for the market's quick expansion in this area.

In February 2021, Ford and Google announced a unique six-year strategic partnership to reinvent the connected car/vehicle experience. From 2023, millions of future Ford and Lincoln vehicles at all price points will be powered by Android, with Google apps and services built-in.