According to Stratistics MRC, the Global Satellite Internet Market accounted for $8.37 billion in 2022 and is expected to reach $17.99 billion by 2028, growing at a CAGR of 13.6% during the forecast period. Satellite Internet is a wireless network that provides access to satellite dishes both in space and on Earth. It connects people in remote locations around the world and provides access to current information. Satellite Internet is accessed through high-speed network connectivity provided by earth-circling satellites. It is faster than standard internet service and distinguishes itself from land-based broadband services like digital subscriber line (DSL) and cable. Satellite communication provides a land-based interface for accessing voice, video, and information from anywhere on the planet.

According to the Union of Concerned Scientists (UCS), there were nearly 3,372 active satellites in orbit on January 1, 2021. In 2020, nearly 1,283 satellites were launched, and by the end of April 2021, 850 satellites had been launched. The race for satellite broadband has been one of the primary reasons for the increase in satellite launches over the years. 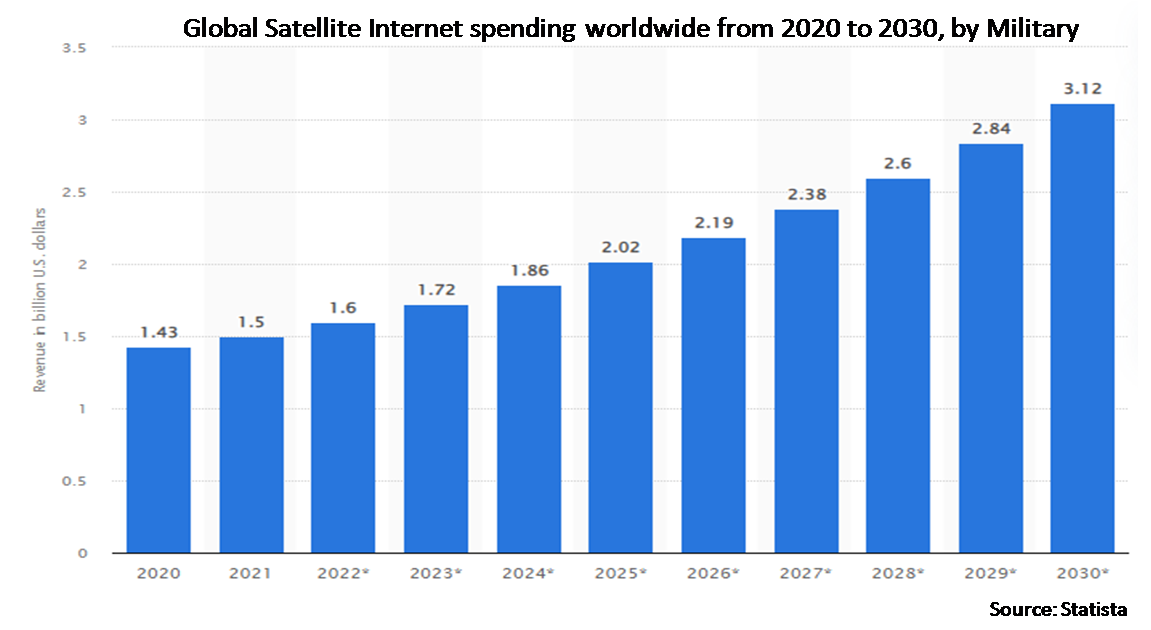 Pricing is a critical aspect of providing internet services. Pricing for international internet transit varies by route but can range from $1 to $3 per megabit per second (Mbps) per month for popular cross-country routes (submarine-based services) to $200 to $400 Mbps per month for dedicated satellite internet. Consequently, satellite internet is currently only cost-effective in remote areas with a dispersed population and in areas where fiber-optic deployment is difficult, which hampers the market. However, future satellites, on the other hand, are expected to offer lower-cost services.

Over the last two decades, the continuous expansion of internet connectivity around the world, as well as numerous technological developments such as 5G, the Internet of Things (IoT), cloud services, blockchain, and artificial intelligence (AI), among others, have significantly improved the satellite internet market growth. Furthermore, growth in the ICT industry has significantly contributed to market growth, increased productivity, and R&D spending, among other economic shifts, in various countries around the world, the supply of goods and services by the ICT industry contributes to economic growth and advancement. Increased internet adoption, particularly in advanced economies, is also expected to drive the satellite internet market.

Latency is the amount of time it takes for data to travel from your computer to its destination. In the case of satellite internet, data must be sent to space, to your ISP, and back again, resulting in low latency or a high ping rate. For instance, customer won't notice any issues with video streaming, but if customer try to play a video game, they will experience so much latency that won't be able to compete with other players. Furthermore, even minor obstructions can interfere with satellite internet signals. Some signals may be temporarily obstructed for short periods of time by wind blowing trees into the path, resulting in intermittent service.

The emergence of COVID-19 is expected to boost the growth of the satellite internet market. Spending on the satellite internet industry is expected to rise compared to pre-pandemic levels, owing to the growing demand for a variety of voice, data, and broadcast communications solutions for organisations, government customers, and consumers worldwide. Global space agencies, such as NASA, are also utilising satellite power to depict global changes. Additionally, with the increased shift of work from home during COVID-19, many workers relocated to their hometowns in rural areas, driving market growth.

The government and public sector dominated the market and is anticipated to continue to be the largest throughout the forecast period. Governments around the world have been investing in satellite broadband technology to provide broadband services in every region of their countries, and only cutting-edge technology is being used to connect rural areas to the broadband network. For example, Hughes Communications India announced the commercial launch of the HTS internet service in September 2022. The service combines Hughes Jupiter Platform technology on the ground with the K-band satellite frequency on GSAT-29 and GSAT-11, both operated by the Indian Space Research Organization (ISRO), to provide nationwide high-speed internet connectivity. Furthermore, governments around the world are implementing satellite internet to run smart cities, which is propelling the growth of this segment.

The K-band segment is projected to witness the highest CAGR growth during the forecast period, owing to its increased use in defence, broadcasting, and security radar systems. K-band monolithic microwave integrated circuit (MMIC) technology, which enables the implementation of K-band power amplifiers and low-noise amplifiers with lower costs, ease of large-scale production, and high durability, is expected to drive the market. Furthermore, it offers communication antenna systems that assist rescue teams in providing email and internet access for operational and crew use, propelling the market in this segment even further.

Over the forecast period, the North America region is expected to acquire the largest share. This growth is the result of increased demand for internet connectivity throughout the region, as well as increased adoption of innovative technology. The users of developed countries such as the United States and Canada are extremely tech-savvy and reliant on internet platforms. This increases demand for high-speed broadband. Furthermore, government spending on the military and defence is steadily increasing, which is expected to boost regional market growth. Additionally, the regional market is expected to grow significantly over the next few years as special forces and defence communication infrastructure improve.

The Asia Pacific region is expected to grow at the fastest CAGR during the forecast period, owing to an increase in the use of satellite internet by various vendors to instantly communicate with their employees and customers. Furthermore, the Chinese government has begun investing in the formation of a wholly owned government company to develop and operate a satellite broadband constellation, providing a lucrative opportunity for the market.

In October 2022, SpaceX announced the launch of an internet service in Japan, making the country the first in Asia to deploy a satellite-based broadband service., KDDI Corporation will operate as an authorized Starlink integrator for subscribers in rural and remote areas

In August 2022, SpaceX Starlink announced a partnership with T-Mobile to launch Coverage Above and Beyond: a new plan to bring cell phone connectivity everywhere. The companies built a new network to deliver this service that will use T-countrywide Mobile's mid-band bandwidth while being broadcasted from Starlink satellites