According to Stratistics MRC, the Global Hydrogen Generation Market is accounted for $5.85 billion in 2021 and is expected to reach $10.03 billion by 2028 growing at a CAGR of 8.0% during the forecast period. Hydrogen is clean, multipurpose, and effective zero emission carrier of energy. Water is a raw material used for hydrogen generation. It efficiently manufactures and transforms into electricity to fulfill need of energy. It can be produced by biological processes from microorganisms such as bacteria and algae. Hydrogen release from organic materials such as coal and biomass by thermo chemical processes uses heat and chemical reactions. 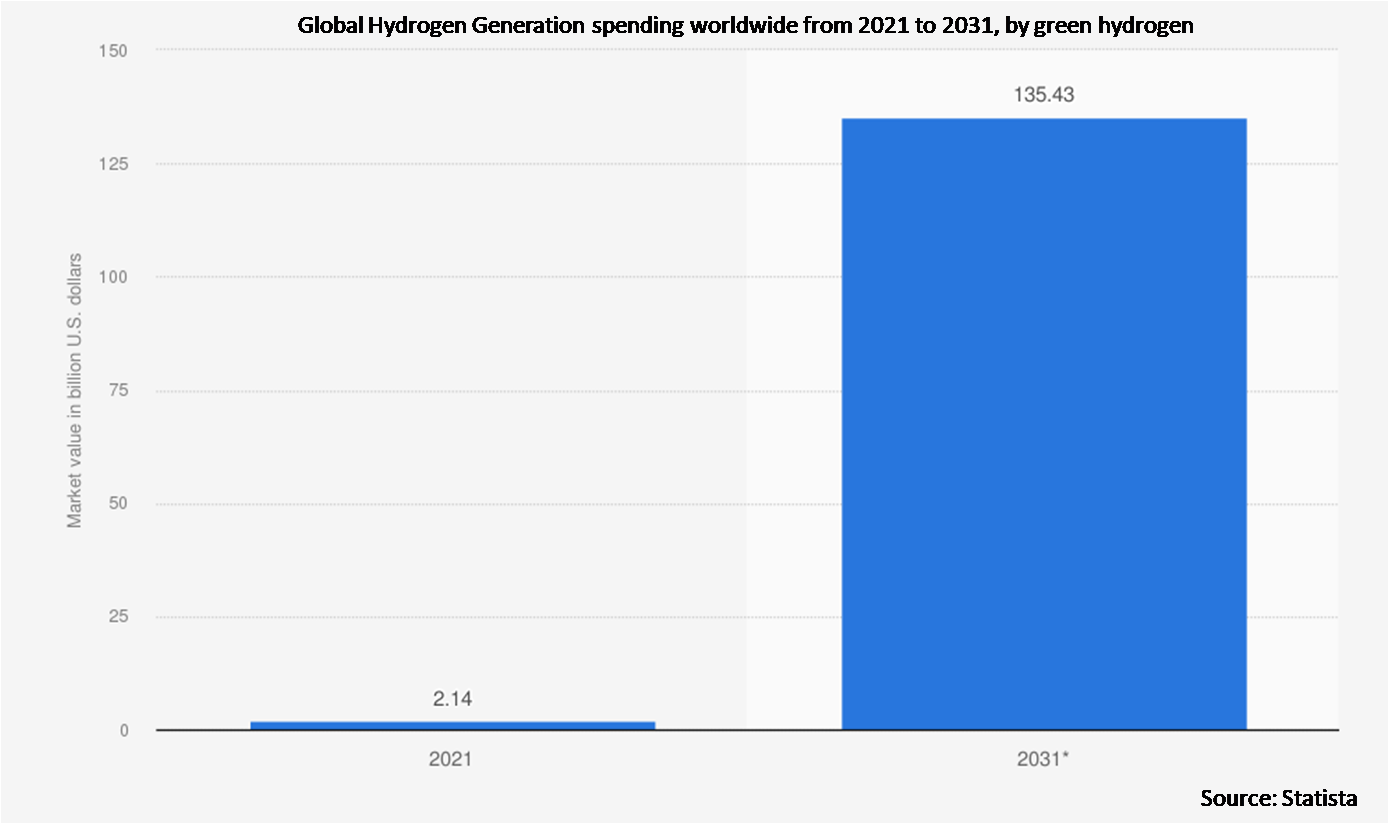 Most of the hydrogen produced today is used in petroleum refineries and the manufacturing of fertilizers. Various technologies are used presently to produce hydrogen, including steam methane reforming, partial oxidation of oil, coal gasification, and water electrolysis. Ninety-nine percent of it comes from fossil fuel reforming, as it has been the most economical method. However, this does not have any real climate benefits as CO2 is emitted in the process. Electrolysis of water produces green hydrogen from renewable. energy resources, such as onshore and offshore wind and solar power. Green hydrogen has numerous applications, ranging from industrial feedstock to fuel cell vehicles and energy storage. The concept of green hydrogen is still in its early phase, and many organizations are investing in setting up new green hydrogen production plants that would help in reducing GHG emissions.

The hydrogen-powered cars are more popular in countries such as South Korea and Japan. The governments of these countries offer subsidies for these vehicles. In addition, they also provide finance for building the necessary infrastructure. In the US, incentives are offered by the California State for the use of fuel cell-powered vehicles. Although hydrogen-powered cars may be a sustainable technology in the modern world, experts believe hydrogen needs to be developed from a natural gas source, which requires the use of fossil fuels. On the other hand, electric cars rely on battery power and hence are greener than hydrogen cars. Efforts are being made to use hydrogen produced from renewable sources. Also, the infrastructure necessary for refueling the tanks is inadequate, which can act as a challenge for the market’s systems.

Emissions of greenhouse gases, such as carbon dioxide (CO2), nitrous oxide, and methane, are responsible for the rising global temperature, which has increased by around 1° C since the last century. Greenhouse emissions are increasing globally, primarily due to the consumption of fossil fuels and industrialization. The US, European Union, Russia, and China collectively account for 65% of the global emissions. Among these, the US alone accounts for 25%. The following chart describes the share of sectors responsible for greenhouse gas emissions in the US. Sulfur levels in fuel have a direct and indirect impact on greenhouse gas emissions. Sulfur also prevents the growth activity of emission control technologies in several domains, such as fuel-efficient gasoline engine designs, traditional diesel as a fuel-efficient alternative, and advanced or hybrid diesel. Sulfur impedes the efficient functioning of certain types of catalysts, which, in turn, translates into higher methane emissions from oxidation catalysts and higher carbon dioxide emissions from more advanced technologies.

Hydrogen can be stored in 3 ways: in high-pressure tanks as compressed gas, in liquid at -253° C, and in chemical form by either reacting or absorbing with chemicals, or metal compounds. Electricity can be stored in the form of hydrogen by using the electrolysis process. The stored hydrogen can then be used again as electricity, but the round-trip productivity, as of now, is comparatively lower than other storage technologies. Still, the interest in hydrogen energy storage is increasing rapidly owing to its higher storage capacity compared with batteries. Liquid hydrogen as an energy transporter has a higher density than gaseous hydrogen and involves liquefaction, which requires a complex mechanical plant, adding to the overall cost. Hydrogen storage provides an alternative to physical storage, wherein hydrogen is stored in solids on surfaces.

The captive production segment is estimated to have a lucrative growth. Socio-economically developing regions, particularly North America and Europe, have a large-scale penetration of this technology, given the ease of adoption. Captive generation of hydrogen is defined as on-site generation that abolishes several problems linked to the conveyance and distribution of hydrogen, and therefore the market is expected to grow substantially. For small-scale industries, on-site generation of hydrogen has gained popularity owing to new technologies being offered at reasonable costs in comparison to delivered distributed channels

The blue hydrogen segment is anticipated to witness the fastest CAGR growth during the forecast period. Blue hydrogen is derived from natural gas through steam methane reforming (SMR). SMR mixes natural gas with very hot steam in the presence of a catalyst, where a chemical reaction creates hydrogen and carbon monoxide. The carbon dioxide emissions produced are then captured and stored underground using the carbon capture, utilization, and storage (CCUS) technology, leaving nearly pure hydrogen. The cost of generating blue hydrogen is low.

Europe is projected to hold the largest market share during the forecast period. The nations across Europe invest heavily to boost their hydrogen production capacities and abide by the stringent carbon emission reduction targets propelling the regional landscape. Europe has observed considerable adoption of hydrogen-powered vehicles and the rise in energy demand and boost in hydrogen infrastructure development. For instance, in September 2020, the government of France unveiled its national hydrogen strategy targeting to augment the hydrogen generating capacity of 6.5 GW and create an investment of about EUR 7.2 billion by 2030.

Asia Pacific is projected to have the highest CAGR over the forecast period. Asia Pacific is one of the leading markets for adopting green technologies to meet the government targets for reducing GHG emissions. Singapore, India, and Malaysia are also showing interest and have just started or are expected to start exclusive programs to promote fuel cells in regional markets. These countries are initially focusing on backup power (stationary application) fuel cells. Japan and South Korea are heavily investing in fuel cell adoption since 2009 because of the commercial deployment of Japanese fuel cell micro-CHP products. Japan is the first nation to commercialize fuel cells and is supporting the projects related to the use of fuel cells in residential and automotive applications. It aims to deploy green hydrogen on a large scale. The country plans to have 200,00 green hydrogen fuel cell vehicles and 320 hydrogen refueling stations by 2025 to meet the global carbon emission standards.

In February 2021, the Air Liquide announced a Memorandum of Understanding (MoU) with Siemens Energy to set up a large-scale electrolyzer production unit and R&D facility for advanced electrolyzer technologies. The collaboration aims to construct an industrial-scale electrolyzer facility with a 200 MW capacity to support sustainable hydrogen generation in Normandy, France.

In January 2021, Cummins and Air Liquide entered into a joint venture agreement to promote green hydrogen. Cummins has provided a 20-megawatt PEM electrolyzer system to generate green hydrogen, making it the largest in operation in the world. The electrolyzer is installed at the Air Liquide hydrogen production facility in Bécancour, Quebec, and can produce over 3,000 tonnes of hydrogen annually using clean hydropower.